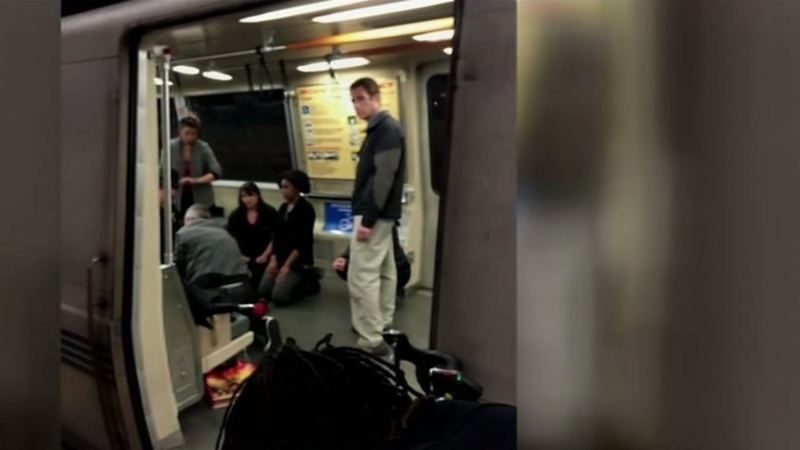 WEST OAKLAND, Calif. (KGO) -- Police are searching for a suspect accused of fatally shooting a man on a BART train in West Oakland on Saturday.

Many of the passengers on the train described a terrifying situation.

Fear & concern among BART riders after last night's fatal shooting on board a train. #abc7now pic.twitter.com/CzLx8K7pog

The BART station reopened Sunday after being closed all night on Saturday.

Police have not released the name of the victim.

Chapin was on the same BART train where one passenger was shot and killed. He captured cellphone video of frightened passengers who got on the floor of the train when the shooting started. "People were screaming 'get on the ground,"' Chapin said.

BART officials said the shooting happened at 7:50 p.m. on a San Francisco-bound train.

Witnesses told ABC7 News they had noticed a disheveled looking man get on the train at the Rockridge or Macarthur BART station as the train approached the West Oakland station.

Police said the man shot a passenger and then ran off the train. "There was one large pop. I looked up, smoke was rising. He had his hand down shooting and there were two, maybe three more shots, the doors were then all open and all of us fled," John McBride said.

One passenger who was a nurse performed CPR on the victim until help arrived.

One witness said the victim was holding a knife, but no one remembers any type of argument before the shooting.

BART officials described the suspect as a bald African-American man, 6 feet 3 inches tall, wearing a green hooded jacket, blue jeans and red and black boxer shorts. He also had on tan military-style boots and a backpack.

On Sunday, many passengers were feeling scared about riding BART. "We just decided to come because it can happen yesterday, it can happen tomorrow and we hope that it just doesn't happen now," BART rider Tierney Freed said.

"Everybody is a little nervous and on edge," BART rider Mattie Scott said. 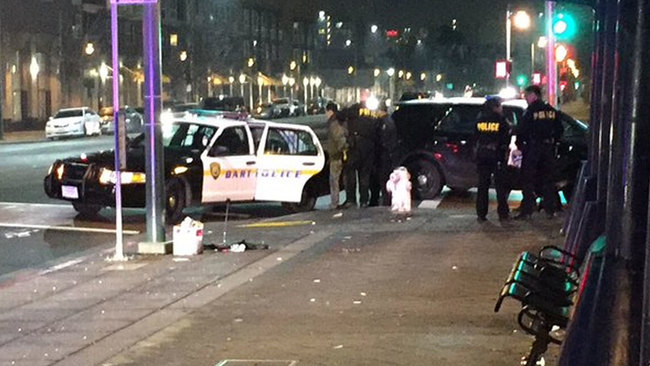