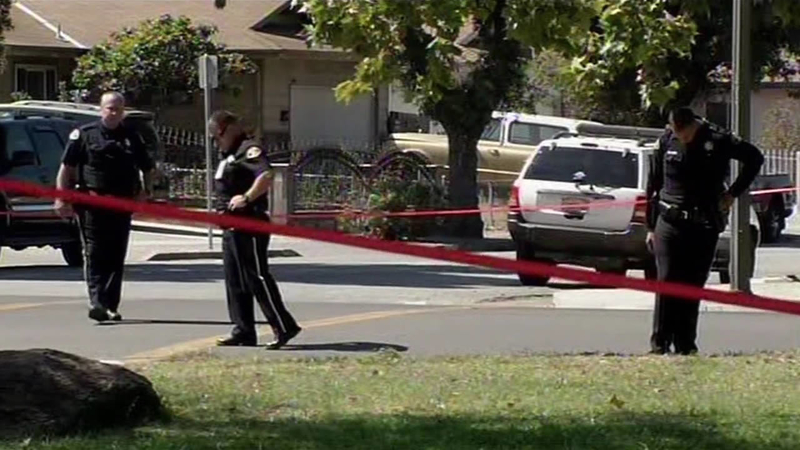 The woman has been identified as Laura Yolanda Reyes, 46, from San Jose.

Investigators at scene of deadly hit and run at Clarice/Huran in #SanJose. Female victim was trying to cross street. pic.twitter.com/m8nyIWcYM3

Around 7:15 a.m., officers responded to a report of a pedestrian struck by a car in the area of Huran and Clarice drives, just north of Tully Road.

Reyes was found suffering from serious injuries and pronounced dead at the scene by emergency crews.

Neighbors are mourning the loss of Reyes. "Could've been me, I walk here every morning around the block. After this, I have my granddaughter, there's no way I'm going to chance it," Michelle Armenta said.

Based on evidence at the scene, it appears a driver in a maroon sedan left the roadway, hit the woman on the sidewalk and then sped off abandoning the car a few blocks away. "This is a park, there's a school nearby. There was kids you know waiting for buses, those kinds of things so it's quite a tragedy and very dangerous, very dangerous," San Jose Police Department Lt. Mike King said.

A homeowner nearby may have captured video of the suspect with a surveillance camera. In the video, you can see him walking across a driveway, but his face is blurred out as police requested. Officials have not commented on whether this is the man they're looking for.

Neighbors told ABC7 News speeding in the area has been a major problem for years with countless crashes and inconsiderate drivers. "It just keeps getting worse everyday, especially with the kids now that school has started, it seems like it's getting worse because they don't even stop for the kids when they cross the street in the morning," San Jose resident Enos Esquivel said.

Other residents agree and are now sending a message to the person who may have been responsible for this morning's tragedy. "It may take time no matter what, but they'll find you, stay there. Don't be a coward and just run off and leave a person dying on the street," San Jose resident Michelle Armenta said.

This is San Jose's 31st traffic fatality of the year and the 14th involving a pedestrian.

For Angelique Rosales and her family, the numbers are not surprising. "There's been a few times I've walked my son across the street and almost been hit a few times, just by impatience. So I'm really concerned about that," she said.