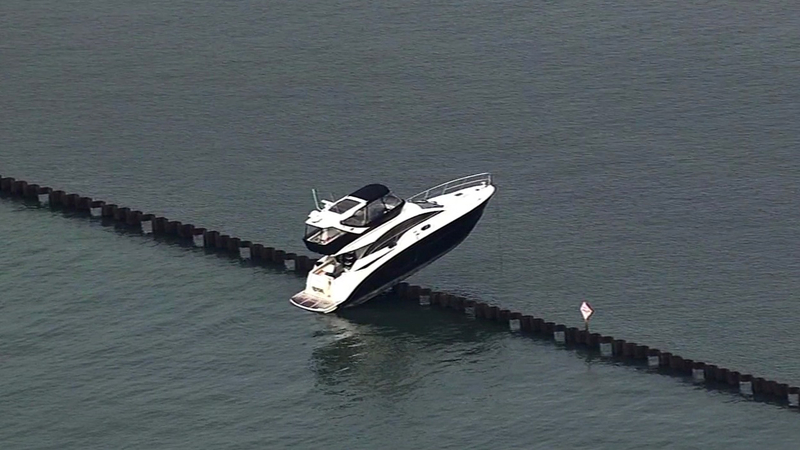 OAKLAND, Calif. (KGO) -- A large cabin cruiser got stuck on a sea wall in the Oakland estuary, which was submerged due to the unusually high tides. The family aboard was rescued by the U.S. Coast Guard Sunday and a day later, it was the boat's turn.

It looked a toy boat precariously perched on a breakwall near the mouth of the Oakland Estuary. It was a 51-foot cabin cruiser, a $500,000 yacht named "Gotcha".

"It was high tide, so the sea wall wasn't visible," Raffy Lopez, the owner of the boat, said.

This is one of the big holes in the "Gotcha" that was stuck on sea wall in the bay. pic.twitter.com/nBKI8yOozJ

Lopez told ABC7 News it happened around noon Sunday, during an otherwise pleasurable cruise with his family on the bay.

"Well of course, your first thought is, 'Is the boat going to sink?' But it didn't. I called the Coast Guard, they came immediately," Lopez said.

With the Gotcha stuck, Lopez and his family had to be rescued by the Coast Guard. Monday morning, at low tide, he returned with Vessel Assist to retrieve the Gotcha, but it was no simple task.

"It was very stuck, so we hired a crane, we hired Vortex Construction, brought a barge with a big crane and lifted it off because we couldn't move it with our boats," Peter Miller with Vessel Assist said.

Once off the wall, the Gotcha made it to Svendsen's Boatworks under its own power.

"I'm going to get it fixed up and get it back out on the water as soon as possible," Lopez said.

"Gotcha" is heading into the Alameda estuary after being freed from its precarious perch in the bay. pic.twitter.com/NxKfHvNlwr