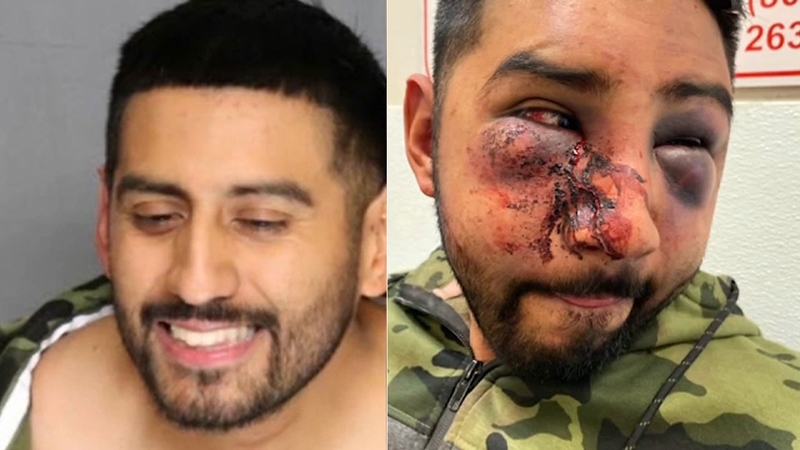 SAN JOAQUIN COUNTY, Calif. -- A Northern California man claims he was the victim of a hate crime after he was allegedly assaulted by San Joaquin County sheriff's deputies on Sunday.

Jacob Servin was released from San Joaquin County Jail Monday morning visibly bruised and battered after he says he was attacked by three deputies.

The sheriff's office, however, says Servin was unruly and abusive and assaulted the deputies.

Servin was initially arrested around midnight Sunday after a night out with a friend. He said he left a bar and restaurant in Stockton and got into the passenger side of his car when he was approached by a Stockton police officer.

Servin was arrested for public intoxication. He says the assault happened later at the San Joaquin County Jail.

"I was tossed around - 20 minutes, 30 minutes. Like you have to punch someone a lot for this to happen," said Servin.

The deputies used nearly deadly force, according to Servin.

"They didn't go in there to give me a beating. They went in there trying to kill me," said Servin.

The San Joaquin County Sheriff's Office has a very different account of events. Sheriff Patrick Withrow says Servin was the aggressor and he was unwilling to comply with officers and was verbally abusive.

He was escorted to a temporary holding cell.

"He grabbed hold of the female officer and refused to let go of her during the fight and tried to drag her to the ground. He kicked several other officers in the chest and other parts of their bodies," Withrow said.

"We book 23,000 people approximately a year. And we don't have complaints like that, ever."

Withrow said the department is conducting a thorough investigation into what happened inside the temporary holding cell Servin was taken to when he was allegedly assaulted.

The Sheriff's Office said it would not say that the officers did or did not use excessive force until the investigation is completed, according to Withrow.

Servin denied any claim that he assaulted an officer during his time in the San Joaquin County Jail.

"If I had assaulted any staff in jail, I would still be in jail and I would have that charge on me right now," said Servin.

The sheriff's office released booking video of the incident. The video shows Servin before and after the incident, but cameras are not available in the holding cell where the confrontation happened.