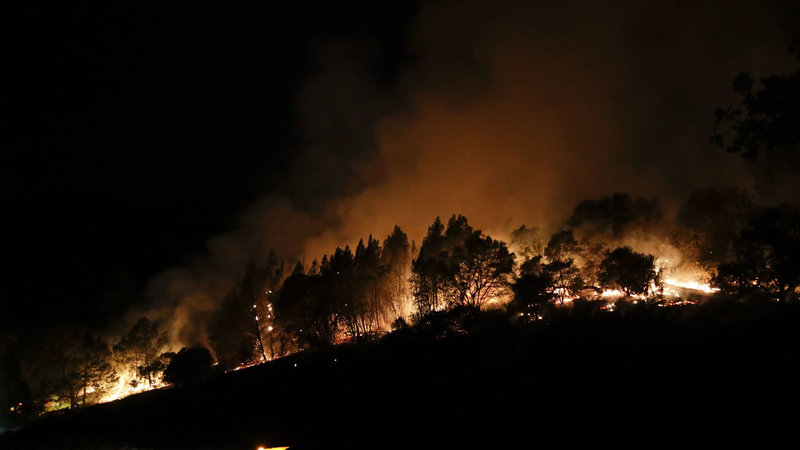 NAPA, Calif. -- Conditions in the North Bay are changing rapidly -- here is a look at the latest information on the deadly North Bay fires:

Northern California communities have been battered from wildfires that are nowhere near over.

They're trying to save or recover what's left of their homes, find lost loved ones or mourn their dead, with the constant threat of the fires still looming.

The death toll climbed to 31 on Thursday, making it the deadliest week of wildfires in California history.

Hundreds more are injured or missing.

In areas where they were able, cadaver dogs were sniffing through the ashes.

A total of 21 fires spanning at least 300 square miles (777 square kilometers) are burning, most of them less than 10 percent contained.

Evacuees fled to friends' houses, shelters and even beaches.

Sonoma County Sheriff Robert Giordano said Thursday night that two more people have been confirmed dead there. That raises the statewide death total from 29 to 31.

While no single fire currently burning has killed as many as those, state fire Deputy Director Daniel Berlant says collectively this is the deadliest series of simultaneous fires in the state in recorded history.

The blazes, most of them in wine country, broke out almost all at once on Sunday night.

California's deadly wildfires have claimed the home of 'Peanuts' creator Charles Schulz but his widow has escaped the flames.

She's staying with other relatives.

Schulz says he's been told the home where his famous cartoonist father died and all the memorabilia in it are gone.

However, most of his father's original artwork is in the Charles M. Schulz Museum in Santa Rosa, and so far that's escaped the flames.

Authorities in Northern California say at least four people were killed by a wildfire burning in California's Sierra Nevada foothills, bringing the state's death toll to 29.

Yuba County Sheriff Steve Durfor confirmed Thursday that the four have died since a blaze ignited there Sunday night.

The fire is burning 100 miles (160 kilometers) north of several blazes in wine country that also broke out Sunday night and that have killed 25 people.

The blaze in the foothills has destroyed more than 100 homes and displaced 2,500 people.

Officials say progress is being made in some of the largest wildfires burning in Northern California but that the death toll is almost sure to surge.

Fire Chief Ken Pimlott says the number of dead is 26 as of Thursday.

Pimlott says crews have made significant progress against blazes in the foothills of the Sierra Nevada and they're being redirected to wine country.

He says the fires blackening California's wine country are threatening dozens of communities and larger cities and that erratic wind gusts are expected in the area starting Friday.

More than 8,000 firefighters are battling the blazes and additional manpower and equipment was pouring in from across the country and as far as Australia and Canada.

California Department of Forestry and Fire Protection spokeswoman Janet Upton says it's unclear if downed power lines and live wires resulted from fires or started them.

She said Thursday that investigators are looking into that and other possible causes.

Jennifer Robison of Pacific Gas and Electric Co. says the utility is focused on restoring power and maintaining safety. She says they will not speculate about the causes of the fires.

She says PG&E will support reviews by any regulator or agency.

Officials say recovery teams, some with cadaver dogs, will start searching for bodies in some areas devastated by wildfires raging in California wine country.

Sonoma County Sheriff Robert Giordano says officials are investigating hundreds of reports of missing people and that recovery teams will start doing targeted searches for bodies Thursday. He warns that identification may be difficult and take some time.

He says officials have found some bodies almost completely intact but other remains are "nothing more than ash and bones."

Giordano says at least 14 people have been killed Sonoma County, raising the death toll to 24.

One of the California counties hard hit by wildfires this week chose not to use one type of emergency alert service to warn residents of possible danger.

Spokeswoman Jennifer Larocque says Sonoma County considered but did not use the Wireless Emergency Alert which sends a widespread message to cell phones and is sometimes likened to an Amber Alert.

Larocque says because of its broad reach officials concluded the message could panic people who were not in danger and trigger unnecessary evacuations that would snarl traffic and delay emergency vehicles.

Sonoma County did use another emergency alert service that texted thousands of warnings to residents to flee Sunday night. However, nearly 80 cellphone towers were knocked out or badly damaged.

Officials say fire crews have made progress on one of 22 fires burning in Northern California.

But he warns that potential gusty winds forecast to hit the area later in the day could hamper firefighting efforts.

Entire cities have evacuated in anticipation of the next round of flames, their streets empty and the only motion coming from ashes falling like snowflakes.

A fire official says blazes burning in Northern California grew a bit overnight but it was not as dramatic as prior days.

However, that could change Thursday as winds gusting to 45 mph (72 kph) and dry air are expected to pummel areas north of San Francisco where at least 23 people have died and at least 3,500 homes and businesses have been destroyed.

Thousands of firefighters are battling at least 22 fires spanning more than 265 square miles (686 square kilometers) for a fourth day.

Officials believe at least 111 rural homes have been destroyed in a wildfire that is chewing through brush and timber on the western slope of the Sierra Nevada in California.

It's one of more than 20 deadly and destructive fires burning across California.

Yuba County spokesman Russ Brown said Thursday that damage estimates are preliminary and crews have had a hard time getting into mountain communities to survey burn areas.

Brown says overnight winds lessened somewhat, giving firefighters an edge as they beat back the fire that broke out Sunday north of Sacramento.