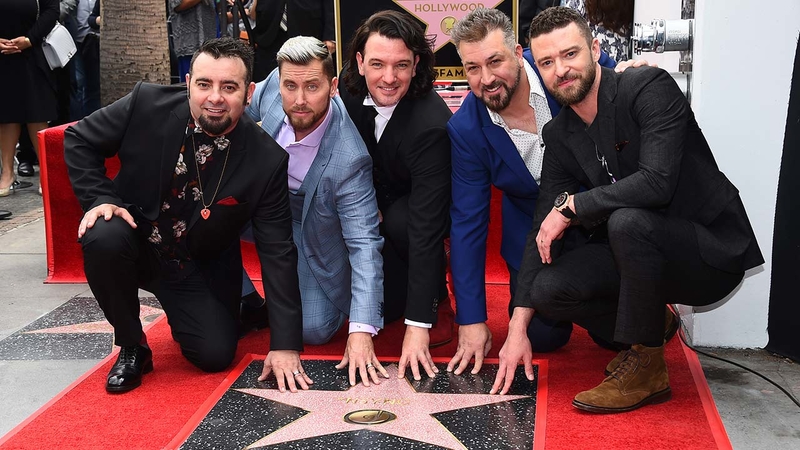 LOS ANGELES -- *NSYNC received a star on the Hollywood Walk of Fame on Monday, cementing the boy band's mark on entertainment history.

Thousands of super-fans lined up in the early morning hours to ensure a good spot to view the highly anticipated star ceremony.

As the band was introduced, Hollywood Chamber of Commerce President Leron Gubler declared Monday as *NSYNC Day in Hollywood.

The designation drew a burst of cheers from the crowd, which only grew louder as the band stepped up to the podium.

Justin Timberlake repeatedly stated his affection for all of the band members, who all shared in a group hug. Timberlake also gave special thanks to his mother as well as his wife, actress Jessica Biel, who attended the ceremony.
EMBED More News Videos

Justin Timberlake thanked his mother as well as his wife, actress Jessica Biel, during the ceremony to honor *NSYNC with a star on the Hollywood Walk of Fame on Monday.

Seconds before the star unveiling, JC Chasez grabbed the mic and said, "By the way, in case any of you didn't know, tomorrow, 'It's gonna be May.'" This references a meme of Timberlake saying "It's gonna be May" that has circulated on the internet for years. It's a play off a line Timberlake sings in the band's 2000 hit "It's Gonna Be Me."

Timberlake, Chasez, Lance Bass, Joey Fatone and Chris Kirkpatrick then all posed for photos by their newly minted Walk of Fame star on Hollywood Boulevard near La Brea Avenue.

After 90 years of entertaining fans, Minnie Mouse received her star on the Hollywood Walk of Fame.

Ahead of the ceremony, fans camped out overnight while covered in merchandise such as *NSYNC blankets, shirts and homemade attire. Throughout the morning, a massive line continued to form with eager fans holding signs for the beloved stars.
"I mean, my work knows, friends, my kindergarten teacher was excited for me coming here. She still remembers that I was a JT fan back then, so, it's real," one excited fan said.

This girl showing up in her custom made #NSYNC dress! Hundreds are camped out to see Justin, JC, Lance, Joey and Chris receive their star on the Hollywood Walk of Fame later this morning!#abc7eyewitness pic.twitter.com/eMAo6eyHTW

A mom-and-daughter duo waited in line with signs that read, "It's tearin' up our hearts we don't have a selfie with*NSYNC. Help us get one," referencing the group's 1997 song "Tearin' Up my Heart."

Though *NSYNC went on a hiatus in 2002, they did reunite for a brief moment in 2013 for Timberlake's MTV VMA performance.

TIMELAPSE! Thousands have lined up to catch a glimpse of their favorite boyband #NSYNC as they receive a star on the Hollywood Walk of Fame! #abc7eyewitness #byebyebye pic.twitter.com/MZ9WxWyzYg