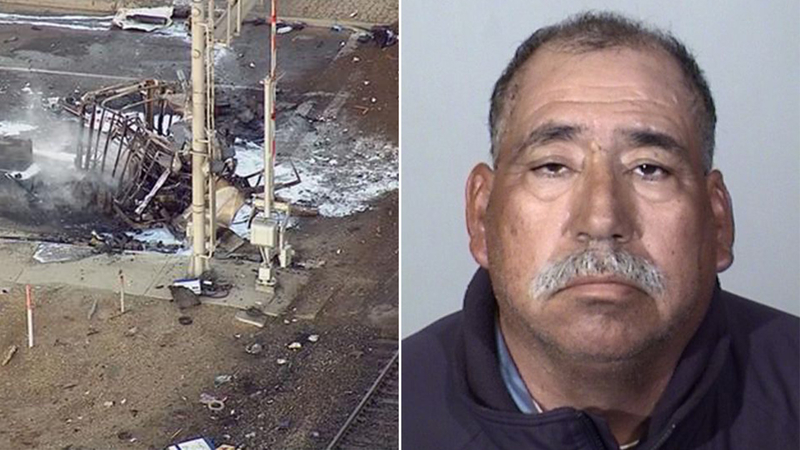 OXNARD, Calif. -- National Transportation Safety Board investigators have determined that the truck involved in the Metrolink train crash in Oxnard was not stuck on the tracks as initially believed.

About 2,100 crossing accident occur each year, but Tuesday's derailment drew NTSB attention because the truck was found having driven down the tracks. Investigators are expected to remain on scene for five to seven days.

As part of the investigation, NTSB plans to do a sight distance test, which means they will set up a mock situation to see how far down the track each person could actually see from both the train and pickup truck.

The NTSB is also looking at video and data equipment on the train that should reveal the moments before the crash. Their investigation will likely take months to complete.

Jose Alejandro Sanchez Ramirez, 55, of Yuma, Arizona, was arrested Tuesday on suspicion of felony hit-and-run after a Metrolink train headed toward Los Angeles struck his large pickup truck, which was hauling a trailer, on the tracks in Oxnard. He was scheduled to be arraigned Thursday.

Information from the control cab showed the train engineer managed to hit the brakes early, but could not avoid the crash.

Ramirez's lawyer Ron Bamieh called the collision an "accident." At the time, Ramirez was driving his company's truck and trailer. He has been employed by the same produce trucking company, The Grower's Company, Inc., for 12 years.

"The arrest of Mr. Ramirez is the unfortunate result of law enforcement attempting to cast blame on a man who was caught in a tragic situation with no way to stop the oncoming tragedy. He does not know how or why the truck he was driving stopped on the tracks, and wishes there was something he could have done to prevent this accident," Bamieh said.

Bamieh added that his office's investigation showed that Ramirez's truck did become "entangled and unable to move off the railroad tracks. The truck and the trailer were somehow stuck."

Ramirez has been married for 30 years and has two children, his lawyer said. In 1998, he pleaded guilty to driving under the influence.

About 50 people were on board. Twenty-eight people were taken to a hospital, including four in critical condition. No fatalities were reported.

On Wednesday, clean-up efforts continued. All derailed cars had been removed from scene. Track repairs were complete by late-Wednesday morning.

Several Metrolink commuters on Wednesday traveled regularly on the same line of the train that had crashed the day prior.

"First, was shocked and actually also blessed that I wasn't on the train, but more shocked to the people on the train. I feel bad for the people who were injured," Camarillo resident Gavin Gobuyan said.

"Right now, I'm getting kind of nervous, but it's in God's hands. You just ride and try to deal with it and hopefully get to your destination," Camarillo resident Ken Villa said.

Commuting around the area

Metrolink service on the Ventura County Line is expected to resume regular service a day after a train collided with a pickup truck on the tracks in Oxnard.

Metrolink riders for Ventura County Line Trains 102, 104 and 106 were initially bused around the crash site between the Camarillo, Oxnard or Ventura-East stations and the Moorpark station. The track was restored Wednesday morning and the first passenger train to pass through the crash site was scheduled to arrive at about 5:40 p.m.

Amtrak trains, which were suspended in the area on Tuesday, also resumed regular service in the area. The changes impacted Pacific Surfliner and Coast Starlight trains 11 and 14.

Drivers passing through the area may face some delays. Fifth Street between Rice Avenue and Del Norte Boulevard was closed for clean-up crews. One northbound lane on Rice Avenue was shut down near Fifth Street.