Oakland A's, MLB teams hit it out of the park for North Bay fire survivor 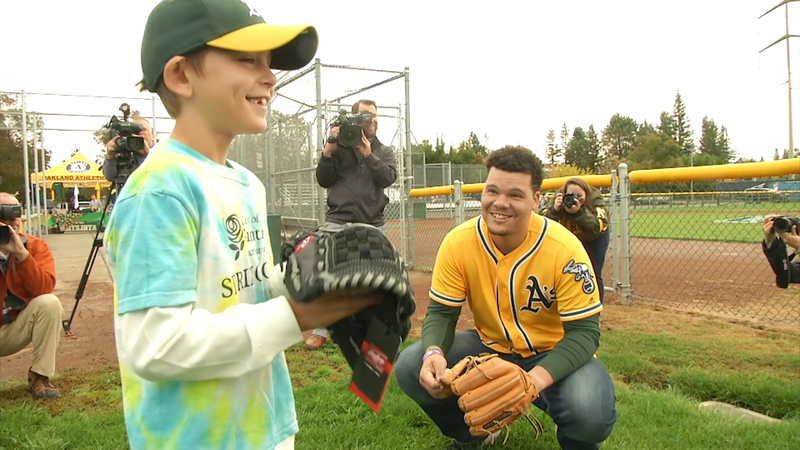 Catcher Bruce Maxwell even took the shirt off his back for the young fan. "This is my game worn jersey. This is for you my man," said Maxwell as he signed the jersey. "Thank you," replied Loren.

Loren wrote a letter that cut to the core of what it's like to lose everything.

Young @Athletics fan pens heartbreaking letter to team after losing all of his baseball memorabilia in the #NorthBayFires #abc7now pic.twitter.com/5dNDt5PLkY

"When I actually sat down and read it, I mean it was devastating. I mean it really was," said Maxwell.

Big league dreams were fulfilled at age 9 for one North Bay fire survivor.

"The day after the fire, he was hiding underneath the couch crying about all the stuff he lost and his grandma just said, hey, get it out,'" explained Tait Smith, Loren's father.

Loren's aunt sent it to an ABC 7 News photographer, reporter Katie Utehs tweeted it, and from there...

"I thought it would just not go anywhere, but it just went everywhere," said Loren.

The tweet went viral. Private collectors and MLB teams wanted to know where they could send items for Loren. The A's set up a mailing address then Katie and the team went to work responding to tweets.

"This is a Ricky Henderson one right here," said Kaval as he showed Loren a signed baseball. "That's pretty cool. I remember I had one," responded Loren. "You had one like that, this replaces it," explained Kaval.

Teams across the league sent care packages, hundreds of fans did too, the A's are giving the family season tickets and Loren's been invited on the field.

"Have you ever thrown out the first pitch at a baseball game?" asked Kaval, "Do you want to do it next year?" "Yeah!" said Loren. "Game on. Get your arm ready," said Kaval.

"It's still kind of unreal," said Smith, reacting to the outpouring of support.

"You're the most famous kid in the world," exclaimed one of Loren's friends.

Loren plans to share his new gear with other kids in need saying, "a lot of my friends lost their houses."

"We want to pay it forward and share it with everybody and share the love that's come through," said Amber Watkins, Loren's mother.

Loren's love of America's past time inspiring a league of baseball fans to hit it out of the park.