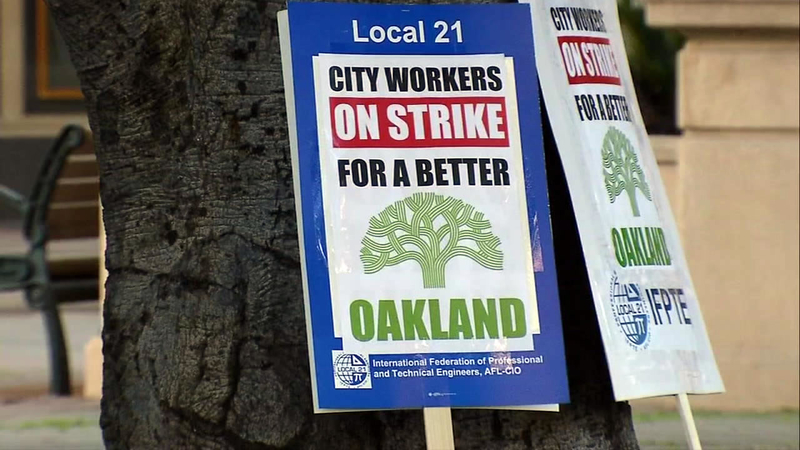 OAKLAND, Calif. (KGO) -- The Oakland City Council will meet behind closed doors again Thursday as a strike by 3,000 city workers continues for a third day in a row.

The union wants a two-year deal with a four-percent raise each year, but Oakland Mayor Libby Schaaf says that could lead to job losses.

There was some optimism Wednesday that the city council's closed door meeting would result in a deal, but it did not after a 2.5 hour meeting.

Schaaf announced the city is already having to stretch to make the current offer, and they can't go any further

"We are trying to get to the point where there is an agreement, so we can get our employees back to work and making sure that we as a city are providing the services that people in this city expect from us," Oakland City Councilmember Larry Reid said.

"After unable to reach a decision, we were disappointed to hear that. But we are glad they are taking the time to consider the matter. Until city council acts, we are still out on the picket lines," SEIU Local 1021 representative Rob Szykowny said.

Some workers said they can't afford to live in this city anymore and city officials said it can't afford to pay them what they want saying, if they agreed to what the union is asking, they would have to lay off 188 full time employees.

Programs and facilities that will be closed include:
Head Start and Early Head Start sites

Other services that will be unavailable include:
No parking enforcement
No street sweeping
No public restrooms at City facilities
No routine maintenance work
No abandoned auto detail
No crime or traffic reports
For towed vehicles, OPD will provide a vehicle release form at the Police Administration Building, 455 7th Street, 1st floor, Records window.
Oakland's animal shelter will provide limited services during the strike: The Oakland Animal Shelter (OAS) will be open during regular hours for owners looking to reclaim their lost animals and for members of the public who must bring in stray or surrendered animals.
Routine services such as adoptions and licensing will not occur.
Partner agencies will transfer animals from OAS' care so that they may be adopted through alternate channels.

Volunteers will assist management to care for the animals in the shelter.
Calls for emergency response on animal-related matters should be directed to OPD.
Calls for routine services including dead animal pickup, strays, and other non-emergency calls will be delayed for the duration of the strike.