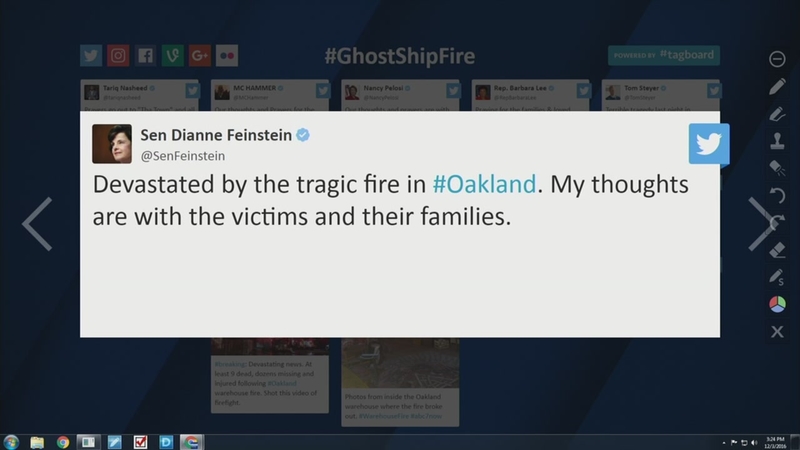 Celebrities and politicians react on social media to Oakland fire

OAKLAND, Calif. (KGO) -- Celebrities and politicians are reacting on social media to the deadly fire in Oakland. Nine people have been confirmed dead and 25 are unaccounted for in the in the fire that broke out in the city's Fruitvale District.

Sending strength and prayers to Oakland for those lost and suffering. A terrible, terrible tragedy.

Devastated by the tragic fire in #Oakland. My thoughts are with the victims and their families.

Our thoughts and Prayers for the families,loved ones and victims of the Oakland Fire. 🙏🏿 #oaklandwarehousefire #oaklandfire

Our thoughts are with everyone affected by the #OaklandFire. We are Oakland. Donate to help. https://t.co/dtVUflIQNp pic.twitter.com/u0qnxfmocb

Heartbreaking news about the #oaklandfire Our ❤️'s ache for those lost, injured or affected.

Statement re: 31st Avenue Fire. More to come this afternoon on this immense tragedy. #oaklandfire pic.twitter.com/egRylqfQhL

Click here to find out if people in the area are safe.
Click here to donate and help the the families of the victims.