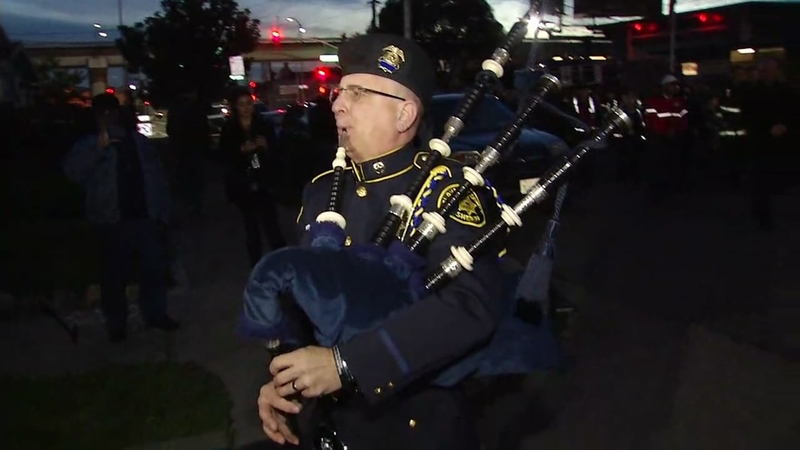 OAKLAND, Calif. (KGO) -- First responders at the scene of Oakland's deadly Ghost Ship warehouse fire paid tribute to the 36 lives lost to the smoke and flames. Among those in the group that participated in a short procession and vigil included officials from the ATF, Oakland police and fire departments, Alameda County sheriff's officers, EMTs, Red Cross volunteers.

Federal investigators have now left the scene of the deadly fire and returned it to local control. That means the community can now get an up close look at the tragic scene of the fire. In the meantime, we're learning there is a new report about a possible cause.

A new report in the East Bay Times says an overloaded electrical system was to blame for the fire.

Now that investigators are mostly gone, the gutted Ghost Ship warehouse has become a place to mourn, for family members of the victims, and the larger community, all sharing a common emotion.

Kay Sims is a student at Laney College, 29-year-old Nicole Siegrist, was a student with Sims in a jazz piano class.

"What a gem, what a talent, she stood out in the class," said Sims.

Diane O'Hara lives not far from the Ghost Ship.

"They were thriving, thriving artists. I could've lived like this back in the day," said O'Hara.

Mario Rodriguez and his family were in town from Santa Rosa, and decided to stop by a building they'd seen only in pictures, until now.

"I'm thinking sadness, how badly people suffered while this was happening. It's just sad. I wish it never would have happened," said Rodriguez.

The ATF and Oakland officials have planned their next public update on the investigation for Tuesday morning.

PHOTOS: 36 victims of Oakland warehouse fire identified
Remembering those lost in the Oakland Ghost Ship Fire
The massive Oakland Ghost Ship fire claimed the lives of 36 people in 2016 and now, nearly three years later, a verdict has been announced. Take a moment to remember the creative souls lost.

Click here to make a donation to help the families of the victims who died in this tragic fire.