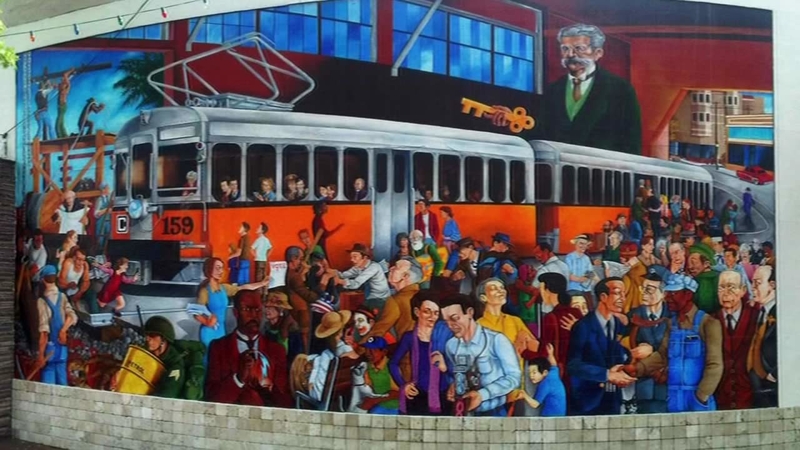 OAKLAND, Calif. (KGO) -- Some members of an Oakland neighborhood are upset after a community mural was cut apart in a mold-related repair job.

The contractors on the job say they had no choice.

Chris Kronner calls the kitchen home. He's been a chef for 13 years and only recently decided to open his own restaurant Kronnerburger.

He signed a lease for the former Key Line trolley station on Piedmont Avenue and work got underway.

"We're spending a lot of time with a lot of great creative people to refurbish a space that we love," said Kronner.

That space includes a community funded mural painted in 2005. It's covered by a blue tarp during construction.

Some paid hundreds for the artist to include a portrait of their loved one.

Pictures show obvious cracks across the outside. Kronner says inside was much worse.

"We found this huge portion of our wall that was covered in black mold and fell away at the touch," said Kronner.

The 5 x 10 foot area used to be a window that was improperly filled in.

"It had been leaking for 20-to-25 years or something. It was an inch thick layer of mold and literally the plywood was gone," said Anthony.

Worried about public safety, the construction crew removed the affected portion of the mural.

"I was really shocked and horrified," said Valerie Winemiller.

Winemiller is on the steering committee of the Piedmont Avenue neighborhood improvement league. She feels Kronner didn't follow protocol, consult proper experts or do enough to salvage the mural.

"It's gone without warning and I think that's really unfair to the community," said Winemiller.

"What we found left us without a choice but to repair the building," said Kronner.

The artist's family currently has the portion of the mural that was removed. The artist hasn't said what he wants to do.