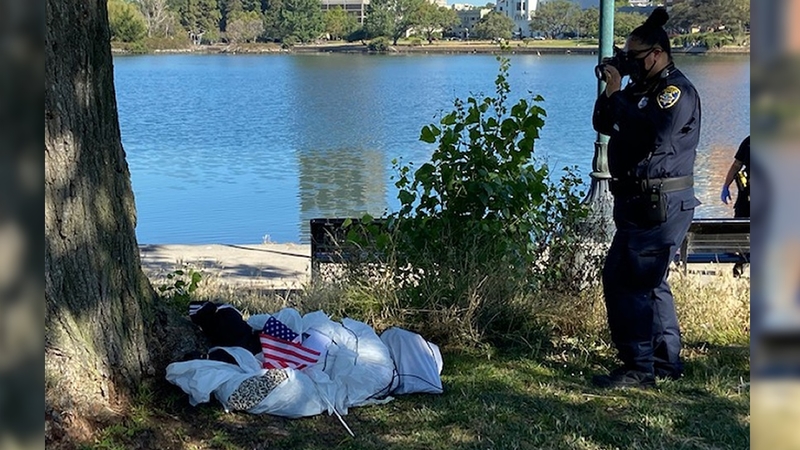 OAKLAND, Calif. (KGO) -- The Oakland Police Department is investigating after material stuffed like a human body was found with a rope tied around its neck and torso near Lake Merritt Thursday morning.

Police say they received a call about a "fake body hanging from a noose" around 8:20 a.m. Thursday.

When officers arrived at the scene on the 2100 block of Lakeshore Avenue, they found material in the shape of a human body with a rope tied around its neck next to an American flag.

The findings are now under investigation by police and the FBI.

Earlier this morning, we removed a human effigy hung from a tree at Lake Merritt — a deliberate and vile attempt to traumatize and divide Oaklanders. We immediately engaged the FBI to investigate this heinous act for what it clearly is — a hate crime. pic.twitter.com/rsGk9zeSd9

The incident is being classified as a hate crime, the Oakland police department said.

That incident is also being investigated as a hate crime.

"The Oakland Police Department and the City of Oakland understand the historical and harmful associations of ropes, nooses, and effigies attached to trees, limbs, or other objects that are often associated with hate crimes and racial violence," the department said in a statement. "We recognize that especially at this time, any symbolic messages such as these incidents frighten and harm our communities."

Police have extra patrols around Lake Merritt during this time.