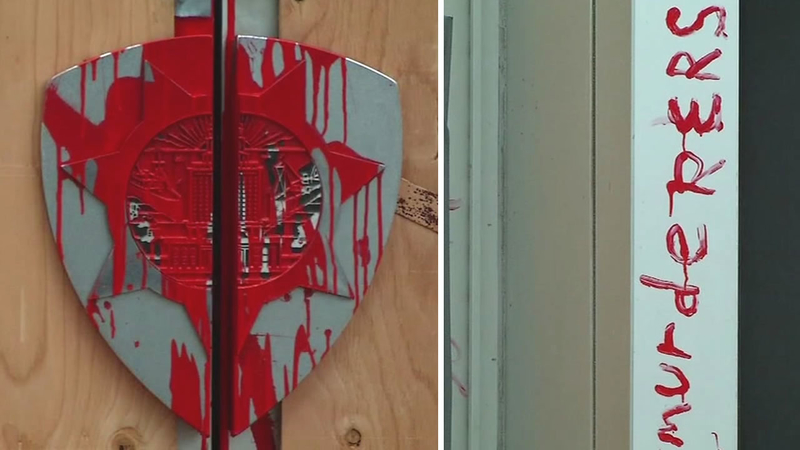 OAKLAND, Calif. (KGO) -- Oakland police are stepping up their patrols and safety protocol in the wake of a chaotic night in the city. They're preparing for another planned protest tonight, while businesses are cleaning up damage.

Police tell us they issued a citation, made five arrests, and they expect more to come. They're looking at social media and surveillance cameras to help in their investigation. As they recover from the protest, they're preparing for the next one.

The front door's glass was also shattered and red paint was splashed across it. But police there weren't really focused on the damage Friday morning.

"Although we did experience some vandalism - broken windows and spray paint - we really would like to focus on larger conversation," said OPD spokesperson Officer Johnna Watson. "And that larger converstion is the unfortunate tragedy that occurred in Dallas."

Oakland's deputy police chief ordered his officers to now double up in their patrol cars until further notice.

As people arrived for work in downtown Oakland Friday morning, many shook their heads at the windows that were broken in the protest.

"I understand the anger, I understand the rage, but not the vandalism," said Oakland resident Ruby Antonio. "It's counterproductive to the message that we're trying to get out."


Police describe the crowd Friday night as mostly peaceful. Protesters gathered in front of the police station and then marched to Interstate 880, which they blocked and forced to be shut down in both directions for about five hours.

Officers say bottles were thrown at CHP officers and arrests were made.

Another protest is set for tonight and residents aren't sure what to expect.

"Hopeful for a peaceful protest, hopefully, you know what I'm saying?" said Oakland resident Armani Shane. "But who knows, everybody got their own mind frame about what happened, everybody feels differently."

RELATED: All lanes of I-880 in Oakland reopen after protest blocks highway

No injuries were reported in Thursday night's protest.

Police say they're adding extra officers to the streets for Friday night's protest.

In addition to the rally in Oakland, there's also one planned in San Francisco at Justin Herman Plaza from 6 p.m. to 9 p.m.

And in San Jose, the police chief has ordered that officers patrol in pairs in the wake of the Dallas shooting.