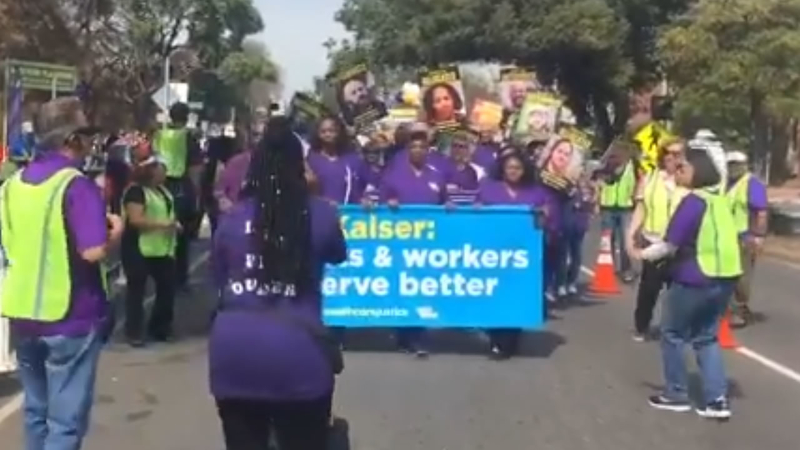 The demonstrators marched down West MacArthur Blvd, angry that the hospital may outsource their jobs.

Harvey Pulliam, who works as a warehouse man, believes his job is on the line.

"I'm really pissed about it because I've given them my hard work and a lot of time," Pulliam said.

The march ended with a rally at the Kaiser Medical Center.

The demonstrators then returned to the intersection of McArthur Boulevard and Broadway.

Estimated 800 plus demonstrators in front of Kaiser Med Center Oakland protesting what they fear are job cuts and outsourcing. pic.twitter.com/IqQ7KTmMFZ

Police had already blocked off traffic into the area. Protest leaders told them in advance they would commit civil disobedience.

Twenty-three demonstrators sat in a circle in the middle of the intersection.

Stephanie Pahwa was among them. "You're willing to be arrested for your beliefs?" we asked. "Yes I am," she said.

After a while, a pre-recorded warning blurted out from a patrol car.

"If you do not leave the intersection, You will be cited and you may be arrested," police warned.

But, the protestors stood their ground.

One by one police removed them from the intersection.

There was no resistance.

25 Kaiser protestors removed from intersection. Warned but not cited or arrested. pic.twitter.com/3HSXfpehnR

The protestors who staged the sit-in were processed but not cited nor arrested.

The Hospital said, it was disappointed that the Union "has chosen to mischaracterize Kaiser Permanente's strong commitment to labor."