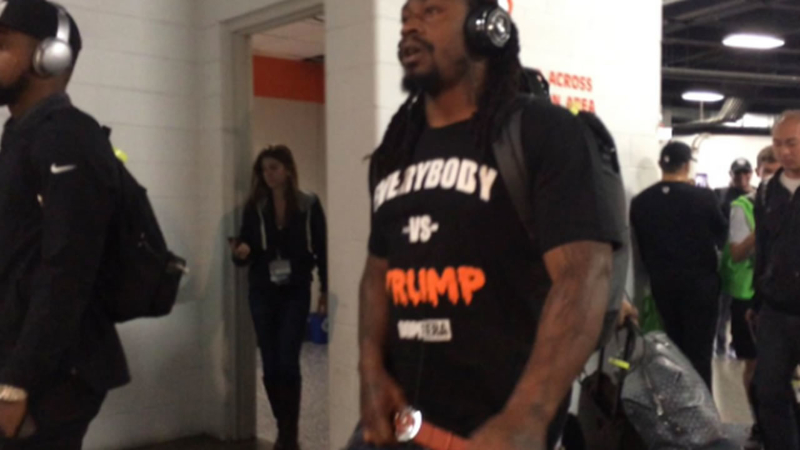 DENVER, Colo. (KGO) -- Oakland Raiders running back Marshawn Lynch was seen walking into the Bronco's stadium in Denver wearing an "Everybody vs. Trump" shirt.

This weekend President Trump tweeted about the mayor of Puerto Rico and questioned her leadership skills during the hurricane relief efforts.

Many felt that Trump's comments were unfounded and tone-deaf.

There has been no word from Lynch as to what inspired him to wear the controversial t-shirt ahead of the game against the Broncos.

Going into their week 4 game against Denver Lynch leads the Raiders with a mere 139 yards and a touchdown on three dozen carries but brings more than just numbers to his hometown team, namely a tone-setting physicality and personality.

"He's been a great addition," Del Rio said, noting he brings "passion and toughness" to a roster that prides itself on nastiness.

"Oh, you've just got to get him on the ground," said Miller, laughing because that's not so easy. "I remember one time when I tried to tackle him (when he was with) the Seattle Seahawks and I had him behind the line. It was like a yard. I think I had him by one leg and he just drug me for the next two and got the first down. Usually when you get a running back he'll just fall, but he's definitely 'Beast Mode.' They call him that for a reason."

Lynch presents another big test for Denver's defense, which is allowing a league-low 59 yards rushing and has yet to yield a touchdown run. That's a turnaround from last season when the Broncos were 28th in the league and allowed the Raiders to rush for 218 yards in Oakland.