ONLY ON ABC7NEWS.COM: Delivery driver breaks silence after he was held at gunpoint, truck torched during Oakland sideshow 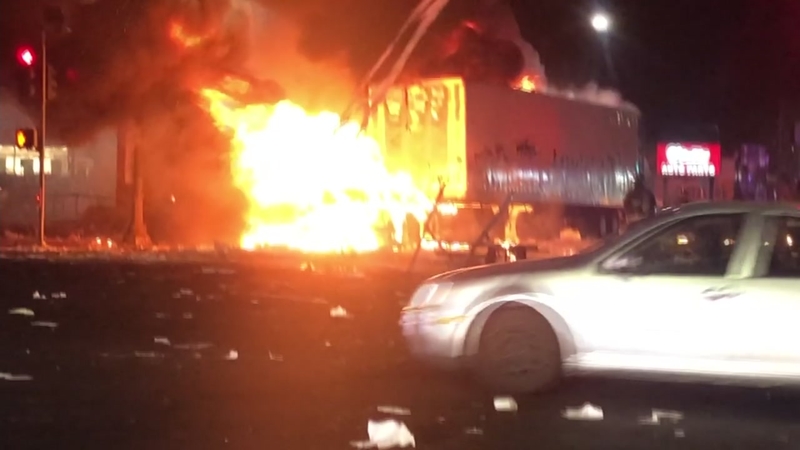 OAKLAND (KGO) -- The delivery driver who was held at gunpoint and had his truck torched during an April 14 sideshow in Oakland is breaking his silence and talking exclusively to ABC7 News.

"I thought I was going to die. I have a kid and I thought I'm not going to see my kid anymore. Yeah I was so scared," said the driver who wanted to remain anonymous.

Dozens of viral videos captured the mayhem at International Boulevard and 42nd Avenue as a raucous crowd swarmed the truck, looted it, and then set the truck and an AC Transit bus on fire.

The driver, who lives in the Central Valley, was on a delivery run from Tracy to Oakland. His truck was filled with canned goods, cereal, and toilet paper intended for an Oakland grocery store.

He was almost to his destination when he got stuck in traffic caused by a sideshow.

"I looked and there were cars spinning around and we got stuck, we couldn't move."

The driver told ABC7 News reporter Leslie Brinkley that he waited for 40 minutes and saw no police.

RELATED: 2 large sideshows in Oakland have some city leaders calling for crackdown

"People were shooting up with guns and I looked to see if I could go through it. When I turn on my truck and honk at them they get mad at me and get in front of the truck and go up and start jumping on it."

But then things took an even more frightening turn.

"They actually stand in front of the truck and came around the cab and ask me to get out and when I got down then they point guns at me. They pointed them at my stomach like that really close to my stomach like this," recalled the driver.

"All you were thinking is I've got to get out of here."

The crowd then started looting the truck and when they were distracted the driver slowly backed away and pulled out his phone to take videos of the chaos.

"They started getting the toilet paper from the back and put fires on them and throw them at the truck."

While that was happening the driver sheltered inside a nearby store and was later able to escape.

He tells ABC7 News that he's still very shaken up, unable to work and worries about the welfare of this family.

"My heart is like beating. I can't sleep anymore."

That April 14 sideshow was the most destructive in recent memory. Another large sideshow created issues in Oakland the weekend before the April 14 incident.

A multi-agency task force involving Oakland Police, California Highway Patrol, and the Alameda County Sheriff's Department has been working to crackdown on the sideshows.

The Oakland City Council also recently voted unanimously to back a state assembly bill that would heavily fine sideshow participants, impound their cars for a month and make driving in and even watching a sideshow a crime.