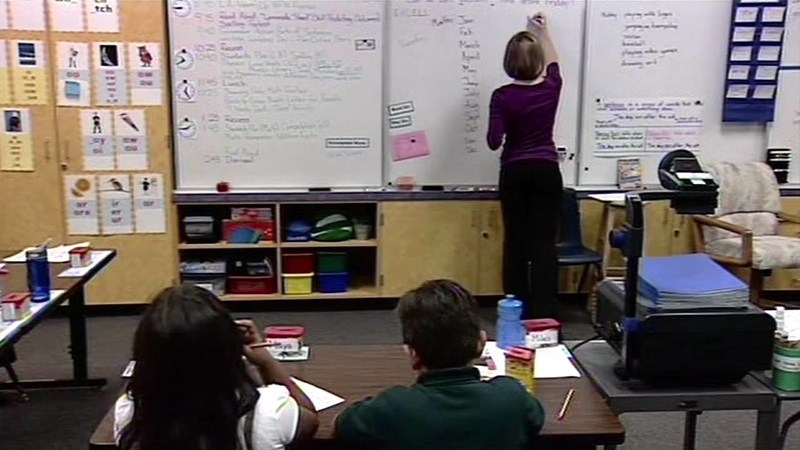 OAKLAND, Calif. (KGO) -- The teacher shortage is nationwide, but a few districts are as desperate as the Oakland Unified School District.

School starts in 11 days, so the district plans to hold a job fair hoping to fill 73 teaching positions.

The job fair will be held at the Oakland Unified District headquarters from 1 p.m. to 5 p.m. on Friday and next Wednesday.

Sara Steinhoff is a new hire and will begin teaching at Lafayette Elementary in Oakland. She picked Oakland because her mother taught here and the district was willing to be flexible. She's still working on her teaching credential. "So when I found that out it was a no brainer for me that I could work and go to school," she said.

Every school is now working on a contingency plan and reaching out to substitute teachers. "We may have to pull in certificated people who are in our central offices back to the classroom, but we are going to make sure very classroom is staffed," school board member Jody London said.

"The searchers will continue even after the beginning of school," Marshall said.

This shortage is happening in other districts in California. This may be because Baby Boomers retiring and years of pink slips discouraged those who were thinking of getting into the field of education.

Wages in Oakland were also lower than at some other districts, but that has now changed. Teachers negotiated an eight percent raise through January 2016. Teachers in Oakland will also have a portion of all new monies the district gets from the state. "That was definitely an incentive, but you know what I think when it came down to it, whether or not they would've had the pay increase, I would have stuck with Oakland just because I love it here," Steinhoff said.
Related topics:
educationoaklandschoolteacherjobsstudents
Copyright © 2022 KGO-TV. All Rights Reserved.
TOP STORIES
Bay Area legend Carlos Santana collapses during Michigan concert
Parents of boy, 2, found alone at parade shooting among dead
Highland Park parade shooting suspect bought 5 weapons despite threats
SF officials warn of possible monkeypox exposure at Pride event
SJ animal shelter at capacity as fireworks blamed for lost pets
3 Oakland men missing in Sacramento Co. drowning incident ID'd
3-year-old critically injured in East Oakland shooting on July 4th
Show More
5 hit by outside celebratory gunfire at A's Coliseum, OPD says
Fireworks or barbecue may have sparked NorCal wildfire, officials say
Highland Park parade shooter charged with 7 counts of murder
What we know about 7 victims of July 4th parade shooting
SJ Sharks new hire makes NHL history as 1st Black GM
More TOP STORIES News