'We're supposed to stand up to bullies, not follow them': Former President Obama re-enters political fray in University of Illinois speech 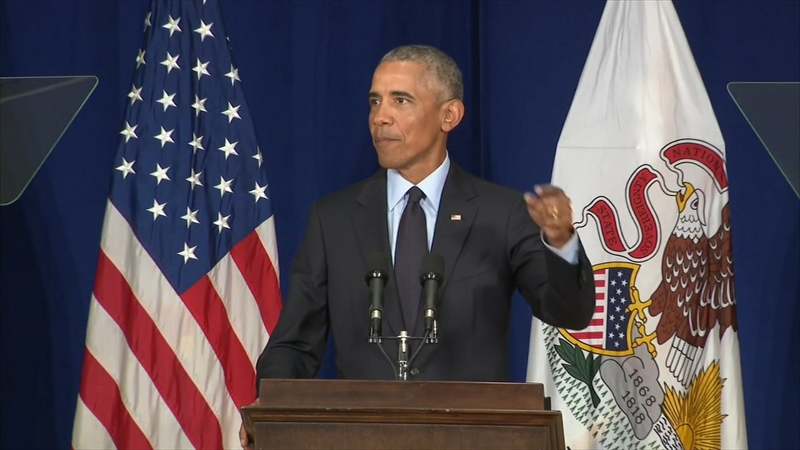 Former President Obama delievers speech at U of I

URBANA, Ill. -- Former President Barack Obama on Friday implored Americans to vote in the November midterm elections, saying the future of democracy in the U.S. is in the balance.

"Just a glance at recent headlines should tell you this moment really is different," Obama said as he accepted an ethics in government award at the University of Illinois at Urbana-Champaign. "The stakes really are higher. The consequences of any of us sitting on the sidelines are more dire."

The speech marked Obama's first steps into the political fray ahead of the fall campaign. While he has endorsed candidates and appeared at fundraising events, he has spent much of his post-presidency on the political sidelines. The speech was a preview of the argument that the former president is likely to make throughout the fall.

Obama said President Donald Trump is "a symptom, not a cause" of what's dividing the country and that Trump is capitalizing on the same resentments, fear and anger that politicians have fanned for years. He's says it's the result of a rapidly changing world and growing inequality and that politicians who appeal to that fear are using "an old playbook."

"We're supposed to stand up to bullies, not follow them," Obama told the crowd.

Obama: some of you think I’m exaggerating when I say this election is more important than any in our lifetime.... just a glance at recent headlines should tell you this is different, stakes are higher... consequence of any of us sitting the sidelines are dire. @ABC7Chicago

Obama: I am here to tell you that even if you don’t agree with me on politics... you you still should be concerned about a “restoration of honesty, decency and lawfulness in our government” @ABC7Chicago

On Saturday, the former president will stump for House Democratic candidates from California at an event in Orange County, a conservative-leaning part of California where Republicans are at risk of losing several congressional seats.

Next week, Obama plans to campaign in Ohio for Richard Cordray, the Democratic nominee for governor, and Ohio Democrats.

Obama's campaign activity will continue through October and will include fundraising appearances, according to an Obama adviser. The adviser was not authorized to discuss Obama's thinking publicly and spoke on condition of anonymity. While the former president will be visible throughout the general election, the adviser said that Obama will not be a daily presence on the campaign trail.

Following Friday's speech, Obama will travel to California and campaign for more than a half-dozen House Democratic candidates at an event in Orange County. Next week, he'll return to the campaign trail in Ohio to campaign for Richard Cordray and other Democrats.