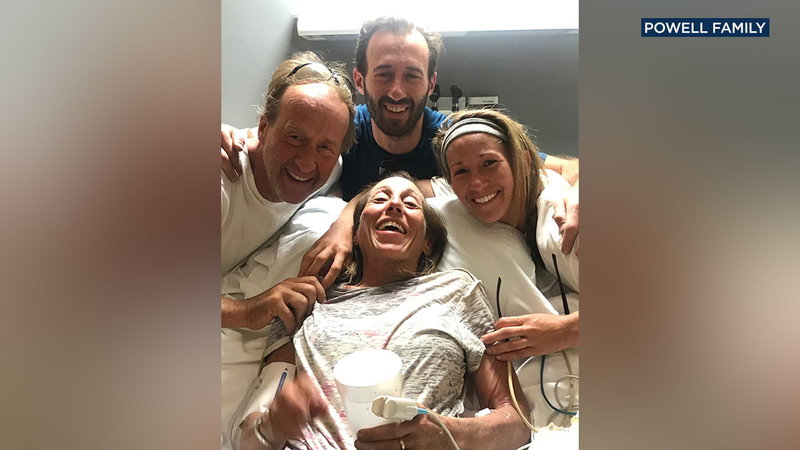 INYO COUNTY, Calif. -- The family of a Huntington Beach hiker who was found Monday, four days after she vanished in the Inyo National Forest, says she was chased by a man with a knife.

Her husband said she went to take their dog for a walk while he moved their Jeep the day she went missing. The woman strayed away when a man who appeared to have been hiding out in the area went after her down a hill, wielding a knife.

Powell's family said she thought the man was chasing her.

Powell, who is described as an experienced hiker, traveled at night to avoid dehydration. She also managed to find water and a cactus to eat, but after a certain point, she couldn't walk any further.

Searchers described Powell as "resilient and strong but exhausted" after being lost for days in an extremely remote area, according to the Inyo County Sheriff's Office. She was transported to a local hospital for medical clearance. She's expected to be released in a few days.

The dog, Miley, was found Monday morning about 2 miles from where Sheryl went missing, authorities said.

The hiker's children thanked everyone who helped find their mom, and they thanked the community for their support.

"Nothing counts. Nothing in the world counts anymore," the hiker's husband said. "This is a miracle of miracles."
Report a correction or typo
Related topics:
southern californiacampingmissing doghikingmissing womanmissing person
Copyright © 2021 KABC-TV. All Rights Reserved.
TOP STORIES
High-speed chase through East Bay ends in crash
Oakland votes to redirect police funding to violence prevention
At least 3 dead, up to 99 missing in Florida building collapse
Audio recording released with voice of VTA rail yard gunman
Security camera video shows moment of Surfside building collapse
CA lawmakers seek to remove 'he' from state laws
Levi's Stadium vaccination site closes after 4 months
Show More
Here's how you can get free Giants tickets with your COVID-19 vaccine
Biden, bipartisan senators have deal on infrastructure
Kitten rescued from freeway ledge near SFO up for adoption
Heat wave heading for NorCal, some spots to reach 114
Nearly all COVID deaths in US are now among unvaccinated
More TOP STORIES News