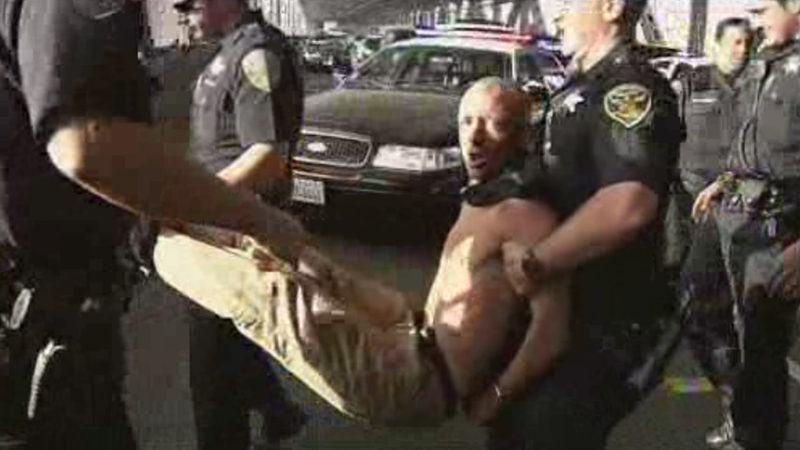 SAN FRANCISCO (KGO) -- Police responded to reports of a man wielding a knife at Chestnut and Lyon streets in San Francisco. But when the suspect saw an escape, he took it.

"He was able to make entry into the officer's marked patrol vehicle and actually steal the vehicle from the officers, which still had the keys in the ignition," explained San Francisco Deputy Chief, Hector Sainez.

The suspect lead police on chase through San Francisco, hitting numerous cars along way. Police say there are multiple reports of damage and they're still tallying how many cars were hit. No people were injured during that part of the chase.

The man then headed westbound on the Bay Bridge, rear-ending two cars stopped at the stop sign for the merge onto the bridge.

Witht police in pursuit, the suspect jumped 30-40 feet onto the lower deck, tried to carjack another driver but then took off on foot when he saw an officer jumped after him. He chased him down until the suspect was caught.

"To be on an island and this happens, and it's only one way on and one way off, it's kind of scary," said Laterious Rrogers, who lives on Treasure Island.

Traffic was backed up across the bridge for hours, as a result.

One person who was in the car that the suspect rear-ended was injured, as were the suspect and two cops.

Another concern was that the cop's weapons were inside the stolen patrol car.