KGO
By by Leslie Brinkley
HAYWARD, Calif. (KGO) -- The CHP announced the arrest of the 22-year-old driver who crashed into a patrol car on Christmas Eve, killing a beloved officer.

The suspect, Mohammed Ali, has a wife and a 4-month-old daughter in Manteca. But he also lived with his father in an apartment in Hayward.

He is accused of driving his red Cadillac into a CHP patrol car on Christmas eve on interstate 880, killing Officer Andrew Camilleri and injuring officer Jonathan Velasquez.

The CHP says that Ali told them that on Dec. 24 he first threatened his wife and then, with both alcohol and marijuana in his system, drove from Manteca to Hayward at speeds of up to 120 mph.

The CHP says his blood alcohol level was .11, well over the drunk driving limit.

Alameda County District Attorney Nancy O'Malley said, "the individual was aware of the danger drunk driving poses to others and the person then chose to disregard that danger. "

O'Malley announced that Ali is charged with second-degree murder and three other felonies for driving under the influence. Ali also faced burglary charges from the Alameda County Sheriff's Department dating back to 2013 but those charges were eventually dropped.

RELATED: Friends say becoming a CHP officer was 'a dream' for fallen cop

Neighbors described Ali as a great guy. Several were in tears. CHP chief Ernie Sanchez said, "he was celebrating Christmas Eve like many of us do, but he chose to drink and drive and to smoke and drive. "

Officer Camilleri's funeral was held this past weekend. Ali will be transported to the Santa Rita jail when he's released from medical care in the next two days. 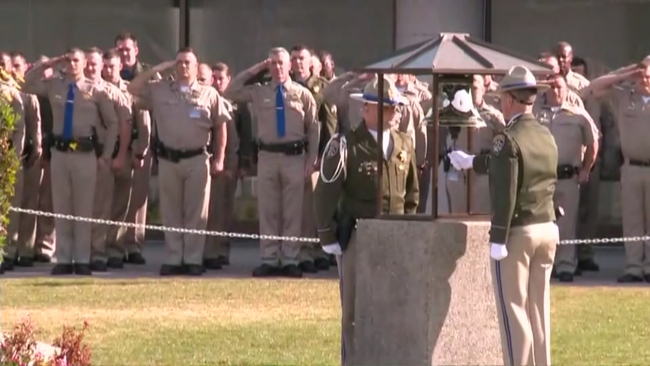