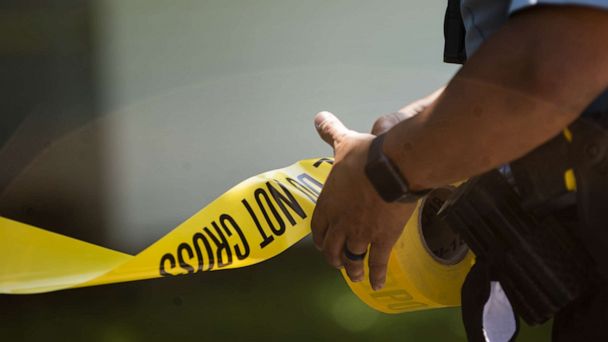 A Toledo police officer is dead after being shot in the chest while responding to a 911 call of an intoxicated person in a Home Depot parking lot overnight.

Witnesses, according to Toledo Police Chief George Krahl, said that the suspect was walking away from officer Anthony Dia when he "for some reason turned and fired a round from the handgun."

Dia, who leaves behind a wife and 2-year-old child, was taken to a local hospital where he died from his injuries.

Police deployed a drone and canine to try and locate the suspect. After police heard a lone gunshot, the 57-year-old white male suspect, who has not been publicly identified, was found dead of an apparent self-inflicted gunshot wound in a nearby wooded area, Krahl said at a press conference Saturday morning.

"Our hearts are broken today over the loss of Toledo Police Officer Anthony Dia, who was killed in the line of duty earlier this morning," Kapszukiewicz said in a statement Saturday. "We are all in mourning, and we will never forget his sacrifice."

"To honor the life and service of Officer Dia, I have ordered that the flags in Lucas County and at the Statehouse be lowered to half-staff beginning tomorrow and through his funeral service," he said in a statement.

Police are scheduled to hold a follow-up press conference Monday to discuss more details about the suspect and the timeline of events.

"Sacrifice comes in all forms and we cannot forget the struggle that our police officers face on a daily basis," Kapszukiewicz said a press conference Saturday.