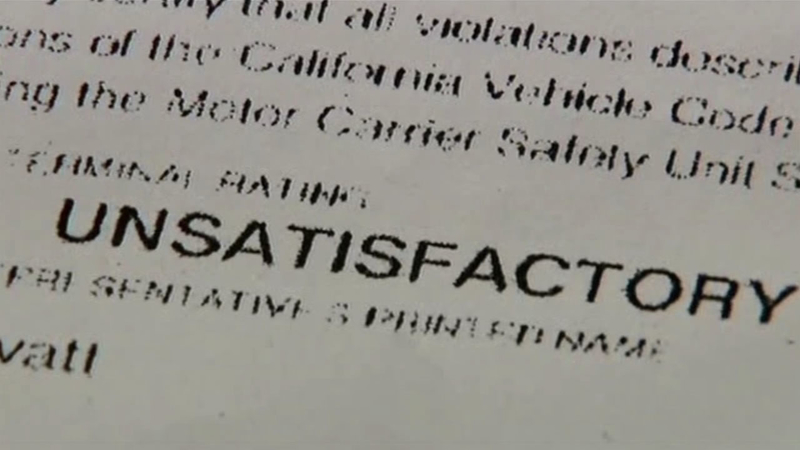 VALLEJO, Calif. (KGO) -- A newly-released California Highway Patrol inspection found that the tour bus company at the center of a Union Square crash has multiple violations. Investigators looked at six other vehicles besides the one that crashed.

The final inspection of the bus that crashed has not been released; in the meantime, the CHP found six other buses are unsatisfactory. The inspection report also outlines driver violations.

The CHP found more than 60 percent of the City Sightseeing tour buses it looked at had violations.

"They were essentially unsatisfactory across the board, but that doesn't mean it's something that can't be fixed," said CHP inspector Kevin Dee.

He says the most significant violations were mechanical. They included, non-working brake lights, non-working emergency exits and a loose steering component

"If it had gotten much looser it could have potentially taken the steering out," Dee said.

According to the report, City Sightseeing didn't require drivers to submit daily vehicle inspection reports. Other violations included City Sightseeing not inspecting its own vehicles every 45 days and not repairing a documented problem.

The report also details some drivers not being drug tested or background checked. Also, for more than a year, City Sightseeing's bus drivers have not been enrolled in the Pull Notice System, which enables the DMV to notify City Sightseeing if a driver gets a DUI or loses his/her license.

"That would be very important in my view," Dee added.

CHP found three drivers were unqualified based on medical documentation not being on file with the DMV.

In an emailed statement, City Sightseeing's CEO Christian Watt said, "We resolved all vehicle-related matters right away, with most issues being fixed on the day of the inspection." He also said the company was making operational changes to account for the other violations.

Robert Cartwright, the attorney for the bus driver involved in the crash, responded to the investigation via email.

"It would appear that City Sightseeing was somewhat lax in complying with regulatory standards. While we don't know if any of these violations were a contributing factor in this particular instance, lax compliance with rules designed for public safety is a risky gamble," Cartwright said.

City Sightseeing has 120 days to fix the problems.

Of the 6 City Sighseeing buses CHP inspected it put more than 50% or in this case 4 out of service.

Zero drivers for tour bus company were enrolled in "pull notice" system - which would alert company to driver DUI or loss of license PG. 2