Man talks about historic swim from Farallon Islands to Marin 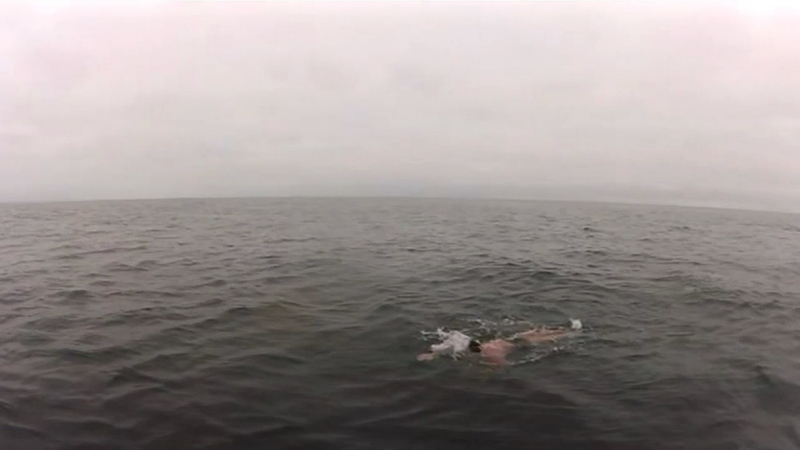 Man talks about swim from Farallon Islands to Marin

SAN FRANCISCO (KGO) -- For those of you who've been on a long distance flight, you can understand how tedious 14 hours stuck in one place can get. But how about being in the cold Pacific Ocean for that long? That's what a Mill Valley man survived for a marathon 30 mile swim from the Farallon Islands to the Golden Gate Bridge.

He swam at an average of two miles per hour, cutting through the cold and salty waters of the Pacific Ocean. It was a painful trek.

"It's not comfortable," said marathon swimmer Joseph Locke. "It's a long time to be swimming, things break down."

If you take a closer look at the video, you'll notice that he's not wearing a wetsuit.

"Fifty-three to 55 degree water," said Phil Cuttie. "He said he that had jellyfish, he had some harbor seals, no great white sharks."

Cuttie is the co-founder and official record-keeper for the Farallon Islands Swimming Federation.

He says Locke is only the second person known to have made the 30 mile swim. In 1967 two people attempted this but only Ted Erikson made it through.

This year two more men tried it. Lock made it and beat the time set in 1967 by 40 minutes.

After nearly 14 hours in the water Joe Locke made it past the Golden Gate Bridge, even tapped the concrete base of the south tower just to make it official.

Locke's skill as a long distance swimmer is impressive, but the timing of this swim is also important. Because there's so little snow melt this year, less water was pushing big currents out of the bay and that certainly helped.

But he also started swimming at midnight to get to the Golden Gate after noon.

The goal was to make it all the way to Aquatic Park, but he had to dodge a cargo ship and then the currents changed.

So what now? One thing's for sure -- he's not interested in training for many other courses.