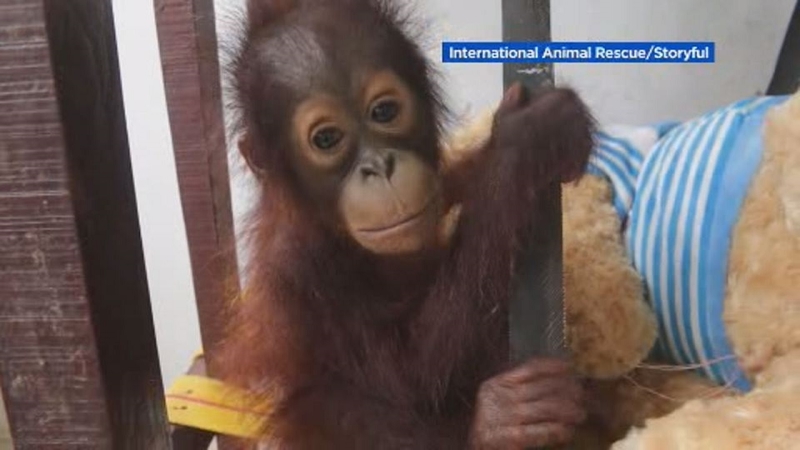 A young orangutan rescued from a small cage in West Borneo is on the mend.

According to the International Animal Rescue, the 2-year-old male was subdued and listless when they rescued him and was probably near death. "It seems that Uka is suffering from a flu virus, which he may well have caught from the human beings around him. If we hadn't rescued him when we did, his condition could have deteriorated rapidly and could even have ended in tragedy," said IAR Chief Executive, Alan Knight.

URGENT RESCUE APPEAL : Our team are caring for a sick baby orangutan named Uka, who had been kept locked up in a small dark crate just 1 metre square.
Please help today: https://t.co/otrFjby78K

The person keeping him said he found little Uka alone on an industrial tree plantation where he worked. He was feeding him fruit and condensed milk.

RELATED: Dog dies from saltwater poisoning after trip to the beach

Now that he has been saved, Uka has been treated by veterinarians and given teddy bears for comfort.

He'll have to be in quarantine for several weeks before being allowed to socialize with orangutans his own age at the International Animal Rescue's Orangutan Rehab Center.

The International Animal Rescue is a non-profit working to save animals suffering around the world. Their work includes saving bears and primates in India and Indonesia to sterilizing and vaccinating stray dogs in developing countries. IAR tries to return animals to their natural habitat but also provides permanent homes when an animal wouldn't survive in the wild.