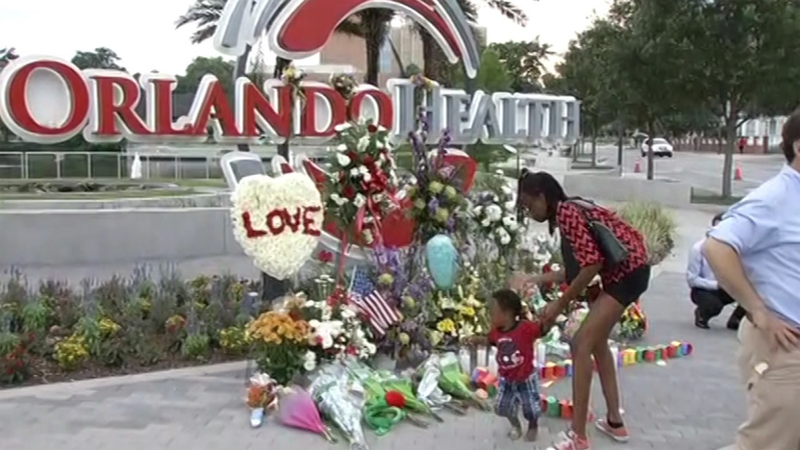 ORLANDO, Fla. (KGO) -- A senior center near the hospital is where families of Orlando shooting victims are gathering, Chaplain Patricia Diaz came to offer counsel.

"They're here to find their loved ones because they never came back home again," said diaz. "I would say, you're not alone."

Families of #Pulse nightclub victims are gathering at this senior center. #Orlando pic.twitter.com/SYB00xNGwW

Diaz was asked to leave her name and number. She hopes she'll get the call to help.

"I jumped in the car, gassed up and got here as soon as I could," said Thornton.

She drove over five hours from Panama City, with her dog, hoping they could both comfort the victims' families. She's an Air Force veteran.

"You know, I volunteered for both deployments because the whole goal was to try to stop terrorism from happening again here," said Thornton.

Orlando is shaken to its core, but kindness is around every corner.

People are writing messages on colored paper, creating a rainbow chain of support for victims at the hospital.


"We want those families to feel that we want the victims, who are fighting for their lives, to be ok and pray that they will," said Chris Ogden, with the First Baptists Church Orlando.


RELATED: Father of man named as Orlando shooter: 'We are in shock'

Family tells me Bryan was shot twice in the stomach at #Pulse; he's just out of his second surgery, in critical. pic.twitter.com/qKeyE6pZk4

Pres. Obama​: There's no evidence Orlando shooting was part of larger plot; no evidence he was directed externally.https://t.co/GwxaLfDfyN

People stop for a moment of silence to honor #OrlandoShooting victims at memorial in the Castro. #abc7now pic.twitter.com/RO9xKMXxAh

Several people camped outside of memorial for #OrlandoShooting victims in Castro. pic.twitter.com/5DPxkO9YXk

Thousands marched in The Castro to show support for victims of the mass #OrlandoShooting. https://t.co/9MZKc261Wghttps://t.co/8iqN7OGY9y