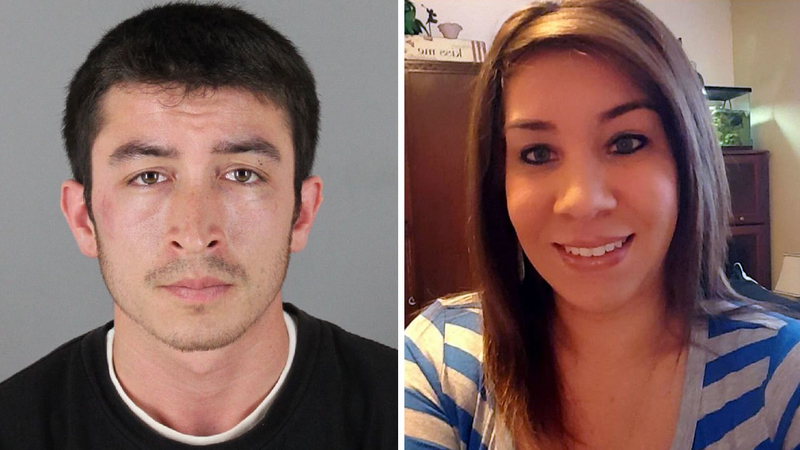 PACIFICA, Calif. (KGO) -- Pacifica police are searching for a 25-year-old man accused of shooting his pregnant ex-girlfriend in the head Tuesday morning.

Resident heard screams and then gunshot and saw her sitting on bench bleeding from what looked like a graze wound pic.twitter.com/iBstIQp24z

Ricardo Colindres is wanted for the shooting, which was reported at 8:11 a.m. at The Casa Pacifica Apartments.

Nearly a dozen officers arrived at a home on Surf Street Tuesday afternoon searching for the suspect, but came out empty handed.

ABC7 News believes that was the victim's home.

The victim is Marissa Johnson, 25, who is eight-months pregnant was taken to a hospital and was said to be in fair condition.

Police said she is doing fine and so is her baby.

Ruth Cooper was asleep when she heard the shooting. "I was woken up by the screams and shot fired," she said.

Cooper immediately called 911 and reported the shooting. Then, she went down to the common patio area where the shots came from. "I was shocked to see that Marissa had been shot," she said.

Johnson, the apartment manager's assistant, was sitting on a bench. "I asked if she needed a blanket or not. It was cold this morning," Cooper said.

Cooper said it looked like the bullet grazed the back of her head. "She was sitting up fine, she was damn lucky," she said.

Residents call Johnson a sweet, cheerful person and an expectant mother who is excited to have her first child. Johnson even posted a sonogram image on her Facebook page.

Some residents said they had a volatile relationship.

Cooper told ABC7 News she may know the motive. Johnson was taking him to court because he keyed her car some months ago.

Colindres is described as a Hispanic man about 5 feet 5 inches tall who weighs 125 pounds and has brown hair and brown eyes. He was last seen in a 2003 silver Toyota Camry with California license plate number 6CGN644.

Police said community members are cautioned not to approach Colindres since he is considered armed and dangerous.

Pregnant Pacifica woman shot was the apt Mgr's. secretary. She just got to work when a witness says she was ambushed pic.twitter.com/0rGeXD1SOj

This man Ricardo Colindres is an ex boyfriend and wanted in the shooting. pic.twitter.com/AgUVE0rvGe