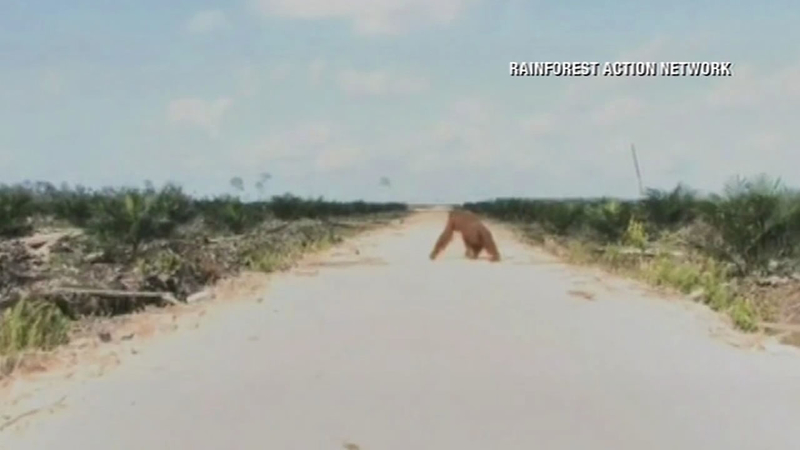 SAN FRANCISCO (KGO) -- For a lot of people who watch the Super Bowl, the big budget corporate ads are part of the fun. Doritos even hosts a highly publicized contest for customers to submit their own commercial and have it broadcast during the game. But this year, days before the Super Bowl is actually played, a parody Doritos commercial has gone viral. It's billed as "The Ad Doritos Doesn't Want You To See." It's a funny look at a very serious issue.

The video has more than 12 million views online and was created by a global organization called SumOfUs. The company's executive director, Taren Stinebrickner-Kauffman, is based in San Francisco.

"This campaign has taken off like no other campaign we've done," she said.

The video features a couple falling in love over their shared love of Doritos, getting married, then off to a honeymoon at a tropical rainforest. They arrive to find the forest has been mowed down to plant palm oil trees.

The spoof is aimed at Doritos' parent company PepsiCo, which buys more than 400,000 tons of palm oil a year.

Palm oil is now the most widely used vegetable oil in the world, and is in about half of all the packaged products in your grocery store. That includes many cookies, chocolates, peanut butter, soap, lotion, even lipstick. Sometimes palm oil is clearly labeled, but it can be listed under dozens of different names.

The demand for palm oil has exploded because it's cheap, the trees grow fast, and the oil does not contain trans fats. Some call it a miracle crop. But palm oil can have a dark side.

"It's connected to massive scale human rights violations and environmental destruction across the world," said Laurel Sutherlin with the Rainforest Action Network.

The Bay Area-based company shared their video of serious destruction in Indonesia.

"These are some of the most biologically diverse forests in the world and they are just being cleared, tens of thousands of acres at a time to put in these long rows of palm trees that then just become biological deserts," Sutherlin said. "And so we have species like the orangutan that have really been pushed right to the brink of extinction."

Stanford Professor Lisa Curran has been studying the effect of palm oil plantations over the past 20 years on the ground and using NASA satellite images. One shows the heavy smoke believed to be coming from thousands of fires to clear land for palm oil trees.

"Man, it's bad," she said. "The clearing just from the Indonesian part of Borneo alone was the emissions equivalent to all the automobiles in Canada."

Several big companies, including PepsiCo, have joined a Roundtable on Sustainable Palm Oil to work to make sure the crop is grown responsibly in the future.

But progress is slow and environmental groups are demanding corporations to do more to save rain forests before it's too late.

"It's totally doable," Stinebrickner-Kauffman said. "Big companies like Kellogg's, like Mars, like Nestle have already put in place the policies we are asking for. All we are asking is for Pepsi to do the same."

PepsiCo says it is committed to using sustainable palm oil. A spokesperson would not speak on camera. Instead, they sent a copy of their palm oil policy.

PepsiCo insists it is committed to using sustainable palm oil. A spokesperson would not speak on camera, but sent a statement.

"SumOfUs' continual mischaracterizations of our palm oil commitments are patently false and run counter to the positive reception our policies have received from expert organizations in this arena. PepsiCo has repeatedly stated that we are absolutely committed to 100% sustainable palm oil in 2015 and to zero deforestation in our activities and sourcing. This latest public relations stunt, focused on fiction rather than facts, does nothing to foster positive dialogue or affect positive change. We find our policies effective and stand by them."

But activists are not giving up. Now the Rainforest Action Network is launching a new campaign focusing on Quaker Granola Bars, also owned by Pepsi.