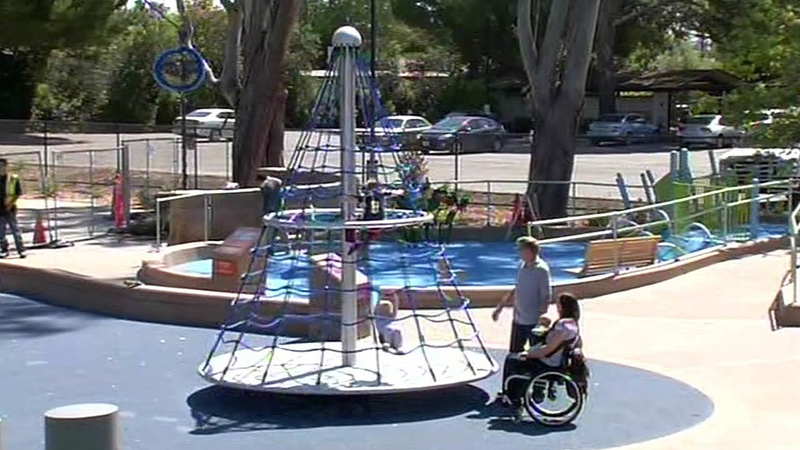 PALO ALTO, Calif. (KGO) -- It's down to the wire in Palo Alto, where crews are putting the finishing touches on what could be a game-changing playground. ABC7 News got a sneak peek before the park officially opens Saturday.

Inside Mitchell Park, crews are softened the edges at what's being called the nation's most innovative, inclusive playground.

"It's been a labor of love, it's been a lot of work, but it's a beautiful legacy to leave behind," Olenka Villarreal from Friends of the Magical Bridge said.

Six years ago, Villarreal went to city hall with the idea of building a fully ADA-compliant park in the city that her daughter could play at. Up until then, there hadn't been one. City officials set aside the land and $300 in seed money, but the rest of the cost would be up to her.

"I would get kids showing up with Ziploc bags of coins from lemonade stands, so a lot of people feel this is their park, and that's what we really wanted," Villarreal said.

Her team was able to raise nearly $4 million to make the park a reality. Ground-breaking was nine months ago and most of the equipment came from Europe.

One area is called the Magical Harp. The design team was very mindful in creating zones that were predictable, especially for children and adults with autism and sensory challenges.

A grand opening celebration will be held Saturday morning; project managers are counting down the hours.

"Together with the community, their voice, supporting it, not just in the design process, but also in funding the project itself," Peter Jensen from the City Of Palo Alto said.

It's a magical bridge that would've never been built without the drive of this community.

"The magic is that everybody's welcome, and if you're able bodied, or not able bodied, or different, or if you're a parent that's been using a wheelchair and have had challenges, you can bring your children here," Villarreal said.