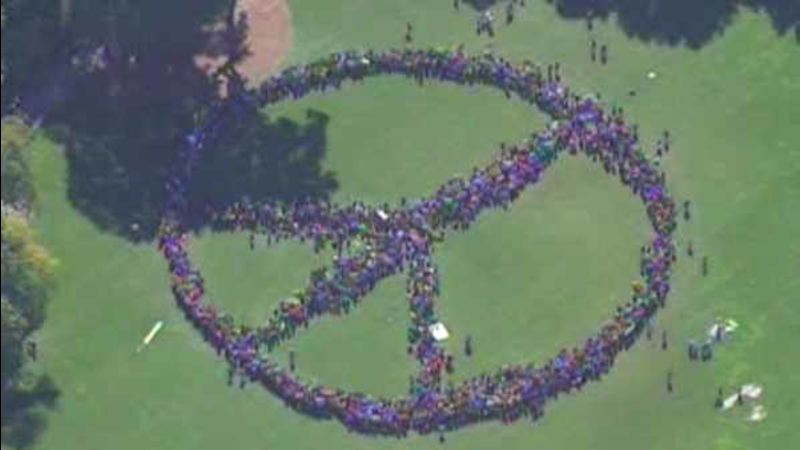 NEW YORK -- Imagine this: thousands of people joining together to form a human peace sign.

It happened in Central Park's East Meadow Tuesday afternoon, all in tribute to John Lennon.

The crowd included everyone from aging hippies to schoolchildren not yet born when Lennon died.

Thousands joined together in #NYC to form a human peace sign to honor #JohnLennon. http://t.co/Jeo2FpwINd https://t.co/JVXW2Nixbv

They gathered to remember him in a way John Lennon would have appreciated, forming the giant peace sign. And his widow Yoko Ono told me her late husband would have been very proud.

"Because he really worked hard on trying to make things better for people, you know, and so this is a very, very positive thing that's happened," she said.

Ono is helping to fund a mobile studio called "The Lennon Bus".

The bus named after the former Beatle has been touring public schools in each of the 5 boroughs to help student musicians and songwriters develop their gifts.

Professional engineers are on board with all of the necessary equipment to help inspire the next generation of artists.

Had he lived, Lennon would have turned 75 years old on Friday, and the 35th anniversary of his death will be observed in December.

But this was a joyous occasion, proof that for fans of all ages, time hasn't lessened their interest nor diminished their enthusiasm.

"I'm a serious Beatle fan so when I heard about this it was like Oh My God, I'm coming!", said one fan.

"John Lennon's legacy involves us imagining and helping this generation use their imaginations," said another.

"He wanted the world to be a better place," said one little girl.

This tribute was only temporary but for his widow very meaningful.