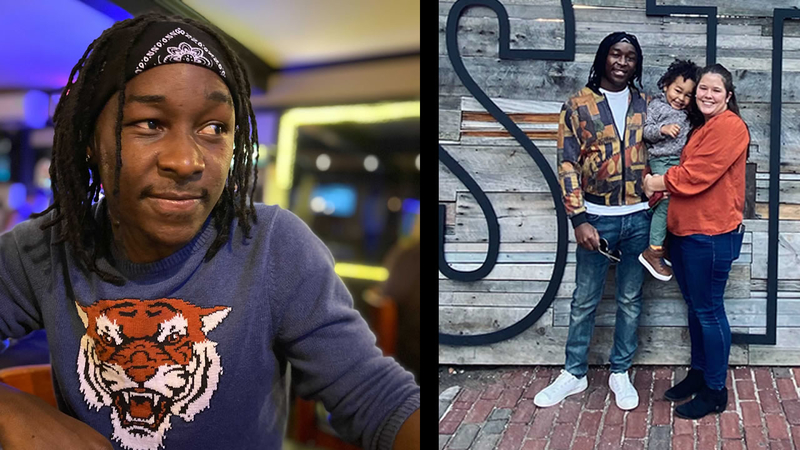 Later Thursday, police revealed that the suspect involved in the crash was on Post Release Community Supervision (PRCS) after a grand theft conviction and was driving a 2003 Ford Explorer that had previously been reported stolen out of San Jose.

Lyons is facing several charges, including DUI, speeding and running a red light. We have a full list of his charges at the bottom of this post.

RELATED: 'Miracle' baby survives crash that killed 4 relatives at once

At the scene, officers found the 26-year-old victim in the roadway. He was pronounced dead at the scene, according to police.

Friends and family members confirm to ABC7 News the victim was Sheria Musyoka, who leaves behind a wife and 3-year-old son. A GoFundMe page has been set up to help support them through this difficult time.

Musyoka had just graduated from Dartmouth and was in the top 3% in his class. Loved ones say he worked hard and had just received his green card in the last two months.

His wife released a statement to ABC7 News describing his fun personality and empathetic nature:
"Sheria was the most authentic person, unashamed of being himself at all times. One second he would be a total goofball and another he would be philosophical. He was empathetic and compassionate. He had a lot of plans for life and he wanted to do really big things. He worked harder for those things than anyone else I've ever known, overcoming obstacles that most people don't have to face. He loved his son more than anyone else and couldn't wait to teach him to speak Swahili and to play soccer, his favorite sport. He didn't deserve to die, especially like that.

"Sheria was a shining light of a human being, with an infectious smile. I quickly went from being his boss to his mentor and then his friend. He was tenacious in his education and professional pursuits and deeply loved his wife and 3-year-old son. I wish justice and not an ounce of leniency for the monster that made irreparable decisions that robbed him of the life. He was so excited to lead a remarkable life and I have no doubt he would have. Countless people that would have benefited from his presence and genuine kindness throughout what should have been a long lifetime, will now never know the amazing, witty, charismatic young person who he was. He deserved so much better than this and so did his loving family."

The company also released a statement:
Sheria was an inspiration to those at Verana Health and in the community. Originally from Kenya, he came to the United States on a scholarship to Dartmouth College. Shortly thereafter, we were fortunate to recruit him to join our company. Sheria will be remembered for his infectious smile and close collaboration with his colleagues. He was brilliant, thoughtful, and kind. Most of all, he was a special and unique individual who brought such a positive influence to the world. We will miss him dearly and send our deepest sympathies to Sheria's family.

The collision involved eight cars and, as a result, five others were hospitalized, all with injuries not considered life-threatening.

Investigators are asking anyone who may have witnessed the collision to call the police department's 24-hour anonymous tip line at (415) 575-4444 or to text TIP411 with "SFPD" at the beginning of the message.

Lyons was released on PRCS to county probation from California State Prison following a grand theft conviction, according to police.

Police also tell us Lyons was previously arrested in Dec. 2020 by the California Highway Patrol - San Francisco for driving a stolen vehicle, being an unlicensed driver and DUI.

San Francisco District Attorney Chesa Boudin's Office released the following statement about the incident:
"Our hearts go out to the family of the victim, who tragically lost his life today. We have not received the case from police yet and cannot confirm details of the incident. We can only imagine the devastation for the victim's family, and promise to dedicate whatever resources are necessary to this case. We cannot bring closure but we will pursue justice. Police arrested Mr. Lyons last December for driving under the influence and driving a stolen car. He was sentenced to a 60-day jail term for violating his supervised release, and, as is common practice, our office requested blood toxicology results so that we could bring the DUI case. As soon as we received the blood results, on Jan. 22, we began working with CHP to pursue a DUI charge and awaited his arrest, which had not yet occurred as of this morning. Again our thoughts go out to the victim's family.
Report a correction or typo
Related topics:
san franciscolake mercedcar crashduipedestrian killedfatal crashstolen carman killeddui crashinvestigationsfsucrash
Copyright © 2021 KGO-TV. All Rights Reserved.
More Videos
From CNN Newsource affiliates
TOP STORIES