KGO
By Wayne Freedman
FAIRFIELD, Calif. (KGO) -- Nala, a German Shepherd allegedly stolen from a Fairfield gas station has been found and reunited with her owner, an Iraq war veteran.

"I cried all of Saturday, Saturday night, most of yesterday," said Dana Martinez, a U.S. Army veteran who dodged mortars in Iraq. She was absolutely heartbroken after her comfort dog disappeared.

She took to the streets to find the dog, which she referred to as, "family."

Thankfully, Fairfield police put an alert out about Nala and the dog ended up being found and returned to Martinez.

She thanked ABC7 News for the report, and is happy to have her beloved pup back.

Today, Dana canvassed the neighborhood with flyers, hoping for help. It includes a photo from a camera in the store, given to Dana, then us. As seen on the flyer, it shows the woman who witnesses say took her dog. #abc7now pic.twitter.com/QRBpUhPnVu

Nala and another family dog had broken out of the family backyard. Video from this AM/PM shows the dogs playing with customers. One of them read the collar and called. The other put Nala in her car and drove off. #abc7now pic.twitter.com/HpLrkPWZWS

We rarely do a missing or stolen pet story, but when it's the comfort dog for an Iraq veteran with PTSD, yes. Dana Martinez believes someone stole her German Shepherd, Nala, from a gas station in Fairfield. #abc7now She's a mess right now. pic.twitter.com/UpGrQviH9w 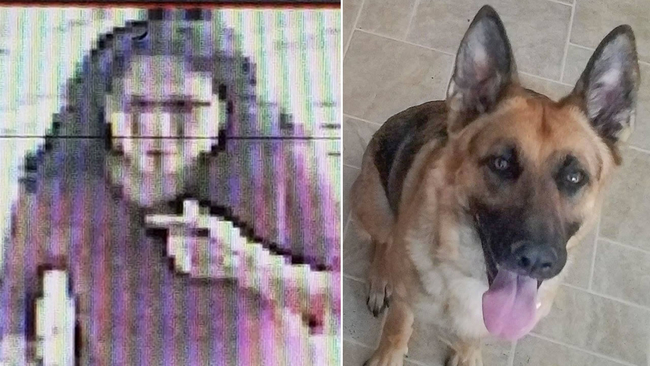 5th case of new coronavirus confirmed in US
49ers sendoff at SJ airport to Super Bowl 54
AccuWeather forecast: Morning rain ends, partly cloudy afternoon
SFDA puts charges on hold against man shot by police in Mission
One son killed, another in the Super Bowl: How the Beathard family will remember Clay
Show More
Berkeley police identify suspect in fatal hit-and-run
Know your 49ers: Who are the 'Hot Boyzz' and why there is a dispute with Dallas Cowboys
Coronavirus: US Consulate to evacuate staff from epidemic-stricken Wuhan
Lunar New Year celebration kicks off in SF's Chinatown
Thousands of anti-abortion activists 'Walk for Life' in San Francisco
More TOP STORIES News