'It's a mystery': Feral cats in SF colony turn up with unexplained severed legs

The leg of one cat was so badly injured, it fell off after he was rescued.
KGO
By Kate Larsen 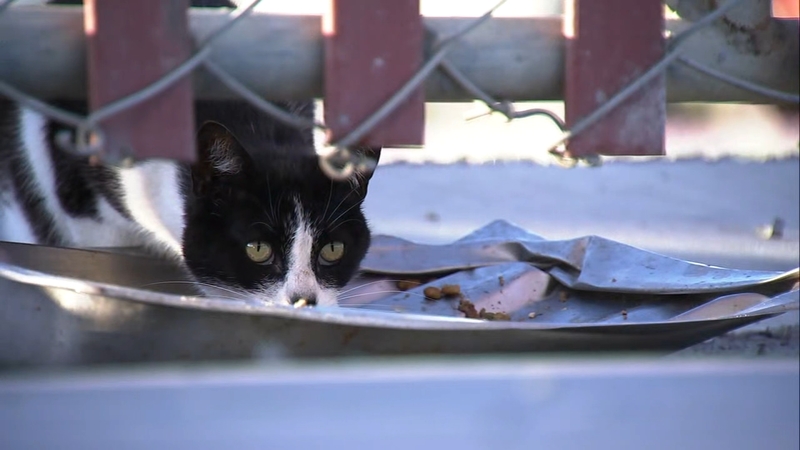 SAN FRANCISCO (KGO) -- A group of feral cats in San Francisco are losing their limbs to severe injuries, and nobody can explain why, including the woman who has taken care of them for decades.

Every day, Sylvia Ortiz and her husband, feed, trap, rescue and fix a colony of cats in San Francisco's Dogpatch neighborhood.

"Dottie, Mabel, Twoey," said Ortiz, as she called out to the cats through a locked PG&E fence Tuesday night.

That place is a PG&E lot on Illinois and 22nd Streets.

Ortiz' nerves are bit raw, perhaps because after 25 years of caring for the cats, something is not right.

"In the last year and a half, there have been four cats unrelated to each other that have had almost exactly the same injury to their legs," she explained.

A kitten in Queens may have used up one of his nine lives when he barely missed being crushed in a garbage truck's compactor.

Ortiz has cell phone video of cats limping with broken or severed hind legs on the PG&E lot. The leg of a cat she named Grayson, was so badly injured it fell off after they rescued him. Another cat had it's leg amputated, and two more cats with severe leg injuries remain on the lot.

Ortiz also says she has seen racoons in the area with the same injuries.

"Because of the kind of people that we are, we want to believe that nobody would do something like this, but since none of us have ever seen an injury like this, and nobody seems to be able to explain it to us, I can't help but think that somebody is up to something here," she said.

ABC7 News reporter, Kate Larsen, asked San Francisco Animal Care and Control if they are concerned a human might be intentionally hurting the cats. SFACC said, "yes - we are very concerned. Whatever is happening to the cats is horrifying."

In a statement, SFACC said their vets determined the cats' injuries are from a traumatic event and explained, "There are no cameras on the site. Conversations with employees of PG&E and construction crews working on site led nowhere. We have no leads, no idea when or how the injuries happened, and not enough information to build a case."

RELATED: SoCal woman on a mission to help rescue dogs being kept at make-shift shelters in Mexico

Donato has been helping Ortiz with the cats, says there is a solution. "We want PG&E to do whatever they need to do to let Rob and Sylvia into the gated area to trap the cats and get 'em out."

PG&E told ABC7 that because of health and safety protocols, they cannot allow members of the public to access their property.

So, Donato launched a petition to fight PG&E on the rule, while Ortiz is left to feed and rescue the wounded cats through a fence.

SFACC says that if anyone has information about the cruelty inflicted on the cats, they should call their emergency dispatch at 415-554-9400.