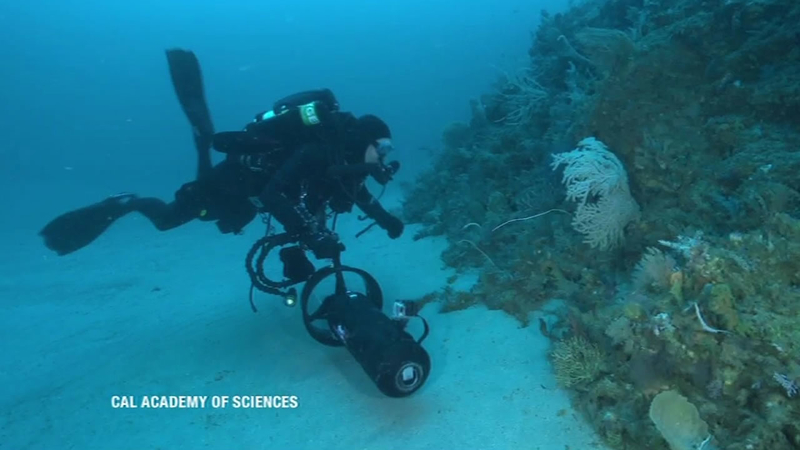 SAN FRANCISCO (KGO) -- Biologists at the California Academy of Sciences in Golden Gate Park are now studying living treasures they discovered on a groundbreaking expedition to the deep ocean. Academy divers traveled to the Philippines to explore an area often known as the Twilight Zone.

The Twilight Zone is the band of ocean ranging from 200 to 500 feet deep. That is too deep for conventional scuba diving, but not as deep as the areas studied with remote control submersibles.

"The Twilight Zone!" exclaimed Bart Shepherd, director of the Steinhart Aquarium at the California Academy of Sciences. "It sounds awesome and it is! Knowing that I'm one of the first few people to ever put eyes on this part of the ocean, just remarkable!"

Academy researchers have been studying Philippine coral reefs for the past two decades, and the museum has a huge Philippine coral reef exhibit. A lot of the coral on display was grown from tiny fragments brought to the Bay Area with special permits. Now the team wants to add to that collection with creatures from the Twilight Zone.

Shepherd said about half of everything the divers see when they make it to the Twilight Zone is unknown to science, "The biggest challenge at the depth is just getting there and getting back."

The team is using equipment called "closed circuit rebreathers." The system allows highly trained divers to go deeper and stay down longer. But biologists still faced a big challenge -- figuring out how to get the deep water fish to the surface.

"Fish have similar problems to humans when they go to the very deep depths and then you bring them up to the surface," explained aquatic biologist Matt Wandell. "They get what, in humans, we call the bends."

One method to get fish to the surface alive is to poke holes in their swim bladders with a needle, but the academy wanted something less risky. Shepherd's goal is 100 percent survival of the fish being brought back to the museum.

After months of experiments, the staff invented its own decompression chamber for fish. Wandall is the mastermind. He showed ABC7 News the chamber, which is made of a hodge-podge of gadgets intended for other uses.

Divers, as deep as 500 feet, collect the fish in a jar. Then they seal the jar inside the chamber. An oxygen tank keeps the pressure constant as the fish are brought to the surface. Once they get to land, the pressure is slowly lowered and the fish decompress.

The fish were held in a makeshift aquarium using inflatable rubber kiddie pools until it was time for the 30 hour trek by car and plane to San Francisco.

The team brought back about a dozen different species of Twilight Zone fish and some are now on display at the academy. You can also see some of the spectacular coral that grow in deep water.

In addition to being on exhibit, the creatures are also the subject of research. Academy scientists are trying to figure out if the Twilight Zone could help some shallow water fish survive climate change. As the ocean gets warmer, Shepherd theorizes that "it may be that moving into the cooler deeper waters is an option" for the fish that are used to more shallow habitat.

The project focuses on a part of the Philippines believed to be the most biologically diverse on earth, but also one of the most threatened. The area is facing challenges from pollution, overfishing, and climate change. The academy is partnering with Philippines' officials try to increase protection for this fragile ecosystem.