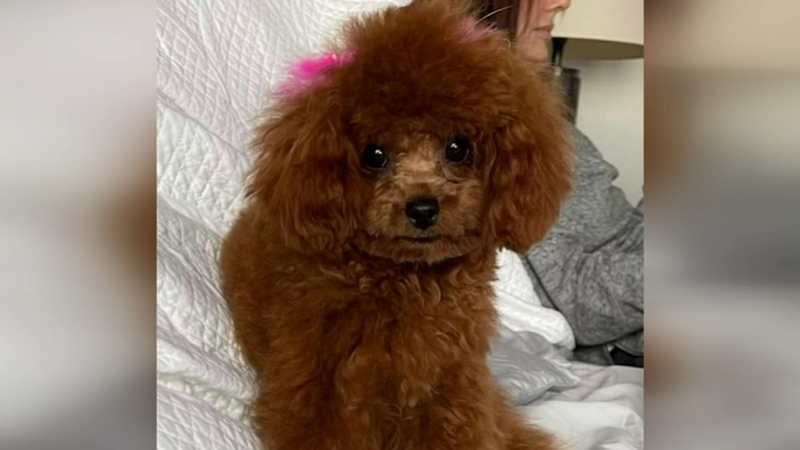 JACKSONVILLE BEACH, Fla. -- A man reportedly stole a puppy while delivering a pizza to a family in Florida.

"It was terrible. I mean, it was just terrible," the dog's owner Rick Block told News4Jax.

Block said his wife used Grubhub to order a pizza from one of their favorite local restaurants. A little while later, they had a pizza but did not have their 10-month-old teacup poodle named Lexi.

Local police said the delivery driver, Arlinson Chilito, grabbed the poodle and hid her in his delivery bag.

Surveillance video showed Chilito walking into an elevator with the dog before leaving the building.

Police quickly tracked down Chilito, arresting him at his home and returning Lexi to Block and his wife.

"We are shocked and appalled by this behavior, and there is absolutely no tolerance for it on Grubhub," the company said in a statement. The company also permanently banned the driver whose account Chilito used.

Block said he hopes everybody uses his family's experience as a word of caution.

"This is not about us. It's not even about Lexi, God bless her. Again, this is about people's safety and their property and ... people we are relying on right now every single day. We used to get five meals a week from Grubhub because we stay hunkered down," Block said.
Report a correction or typo
Related topics:
floridameal deliverypizzadogs stolen
Copyright © 2022 KGO-TV. All Rights Reserved.
TOP STORIES
49ers fans 'coming in full force' to NFC Championship in SoCal
COVID-19 impact: Marin Brewing Company closing after 3 decades
Parents debate push to require COVID-19 vaccine for CA students
UCSF neurologist study reveals connections to COVID brain fog
Community reacts to antisemitic fliers found in SF neighborhood
Cause of death revealed for 23-year-old woman found dead after date
Expert explains why COVID can cause fertility issues in men
Show More
Bay Area-based company allows students to video-chat colleges
CA students must get COVID-19 vaccine under new proposed bill
Man pleads guilty to brutally abusing 4-month-old puppy
Family, colleagues honor young sheriff's recruit killed on I-580
Woman killed in 'targeted ambush' at her birthday party in SoCal
More TOP STORIES News