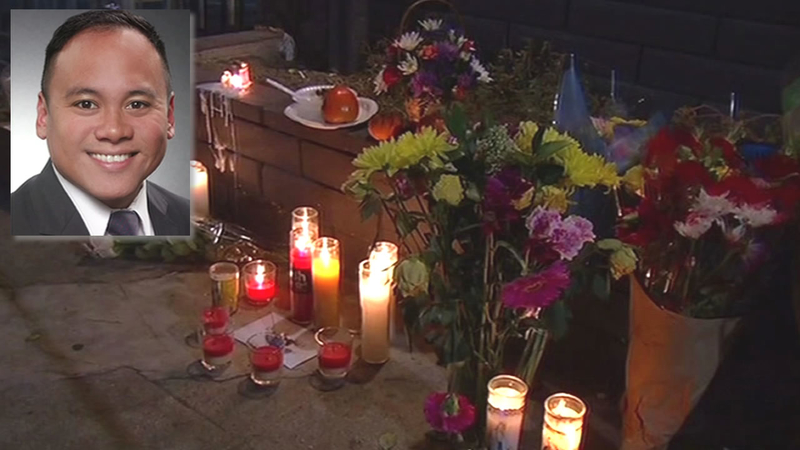 Police are still looking for the suspect or suspects who killed the San Jose real estate agent who was out celebrating a career achievement that night.

Arcega's friend, Sam Pilli, said, "He was a small man with a big heart. Just someone who was quick witted. He'd walk around the corner and I say, 'Hey Arcega. How you doing?'"

Pilli worked with Arcega -- an up and coming real estate agent at Keller-Williams in san Carlos. Pilli said he had just signed his first listing so he was very excited on Friday.

Friday night, Arcega, who grew up in Hawaii, went out to celebrate at the Lu Beer Club and Restaurant on Monterey Avenue in San Jose. Around 1:30 a.m. Saturday, neighbors heard at least three gunshots that they believe killed Arcega who was standing outside of the club.

Flowers and candles mark the spot where he fell. One message thanks him for a 12-year relationship and being a father figure to a child.

Police believe there were witnesses who ran from the scene and they'd like to speak with them to gather any information.

A neighbor says a bullet hole in his iron fence is actually from two weeks ago. He says early morning fights and gunshots have been more and more frequent ever since the club opened about six months ago.

"I wouldn't be around here at 1:30 in the morning. It's San Jose. It's getting worse and worse. Ya know?" San Jose resident George Tsakas said.

Anyone with additional information about the case is being asked to contact Detective Sgt. Rick Yu or Detective Wayne Smith at (408) 277-5283.