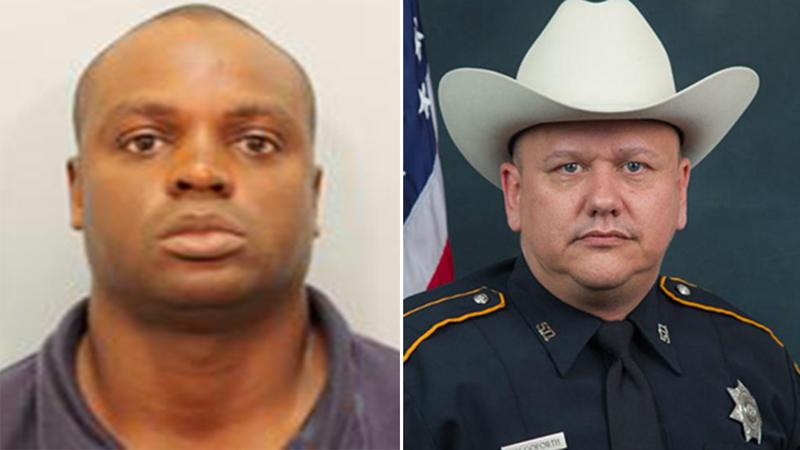 HOUSTON -- Across southeast Texas especially in Harris County, many woke up Sunday asking the big question. What led up to the deadly shooting of Deputy Darren Goforth?

The violent crime left Goforth's loved ones, law enforcement, and ordinary citizens in tears. Authorities called it a "cold blooded assassination" which seemed to be carried out at random because Deputy Goforth was a sworn officer of the law.

Yesterday, the District Attorney's office accepted capital murder charges against 30-year-old Shannon J. Miles. Sheriff Ron Hickman said they recovered the murder weapon inside his home. He said his investigators could not extract any type of information relating to a motive. Hickman went even further, saying he believes Goforth and Miles crossed paths for the very first time outside the Chevron gas station.

Photos from this story


Eyewitness News crews remained at probable cause court in Downtown Houston throughout the morning. Miles is expected to appear before a judge sometime today.

The details of the brutal killing continue to be difficult to digest for anybody with a conscious. Goforth, 47, was pumping gas at a Chevron station on Friday night when the gunman approached him from behind and fired multiple shots, continuing to fire after the deputy had fallen to the ground. Authorities said Miles unloaded his clip, using every last bullet to kill Goforth.

The deputy had gone to the station on the northeast corner of West and Telge roads. The gas station is in a middle-class to upper middle-class suburban area of Harris County that is unincorporated and located northwest of Houston. Investigators said Deputy Goforth about 30 minutes on Friday, he had responded to a routine car accident.

Harris County Sheriff Ron Hickman said the attack was "clearly unprovoked," and there is no evidence so far that Goforth knew Miles. Investigators have no information from Miles that would shed light on his motive, Hickman said.

"Our assumption is that he was a target because he wore a uniform," the sheriff said.

The killing has evoked strong emotions in the local law enforcement community, with Hickman linking it to heightened tension over the treatment of African-Americans by police. Goforth was white and Miles is black.

The nationwide "Black Lives Matter" movement formed after the killing of a black man by a white police officer in Ferguson, Missouri, has sought sweeping reforms of policing. Related protests erupted recently in Texas after a 28-year-old Chicago area black woman, Sandra Bland, was found dead in a county jail about 50 miles northwest of Houston three days after her arrest on a traffic violation. Texas authorities said she committed suicide but her family is skeptical that she would have taken her own life.

Hickman and Harris County District Attorney Devon Anderson on Saturday pushed back against the criticism of police. There must not be open warfare on law enforcement, Anderson said.

Local law enforcement officers were worried after the Goforth killing that others could be targeted, he said.

"It gives us some peace knowing that this individual is no longer at large and that he wasn't somebody that would be targeting the rest of the community," Hickman said.

Miles is likely to be arraigned in court on Monday. You can count on Eyewitness News for every update on-air, online, and on social media as the information comes into our newsroom.