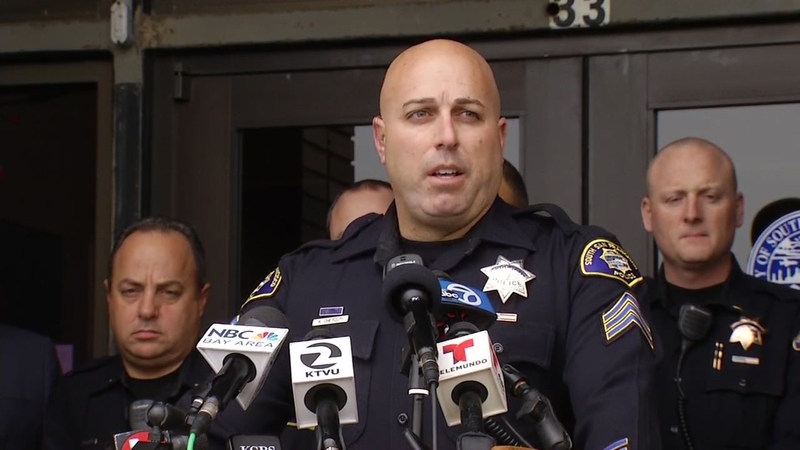 SOUTH SAN FRANCISCO -- Officials say a police officer assaulted Thursday afternoon in South San Francisco remains in serious condition this morning after being struck in the head with a skateboard.

The suspect in the assault, identified as Luis Alberto Ramos-Coreas, 28, of South San Francisco, was arrested on suspicion of attempted murder, assault with a deadly weapon, resisting arrest and battery on a peace officer, according to the South San Francisco Police Department. Witnesses say Ramos-Coreas became violent and irrational after a short foot chase, turning on the officer and eventually striking him in the head with a skateboard.

At approximately 2:20 p.m. a citizen waved down an officer about a disturbance at a business in the 300 block of Grand Avenue.

Police said the officer tried to approach the suspect creating the disturbance, but the suspect refused to comply.

The officer requested additional police assistance, and as a second officer arrived at the scene, the suspect fled on a skateboard.
The officer, who has not been identified, was knocked unconscious. The officer suffered a major head injury and was transported to the hospital in critical condition.

Police Chief Jeff Azzopardi says the officer, a 12 year veteran of the police force, had emergency surgery and is currently in critical condition.

Azzopardi also revealed that the officer is married and has two children.

Ramos-Coreas remains in the San Mateo Jail and has a lengthy history of contact with the South San Francisco police department including several incidents of violence.

He awaits numerous felony charges, including attempted murder of a police officer.

"Law enforcement is going through difficult times, with unprovoked targeted attack on police officers," said Azzopardi. "Yesterday this hit home here in South San Francisco. This attack is not acceptable. The men and women of the South San Francisco police department will remain vigilant in our efforts to keep our officers and our community safe."

The identity of the officer is not being released at this time and witnesses, or persons with information are encouraged to call the South San Francisco Police Department at 650-877-8900.