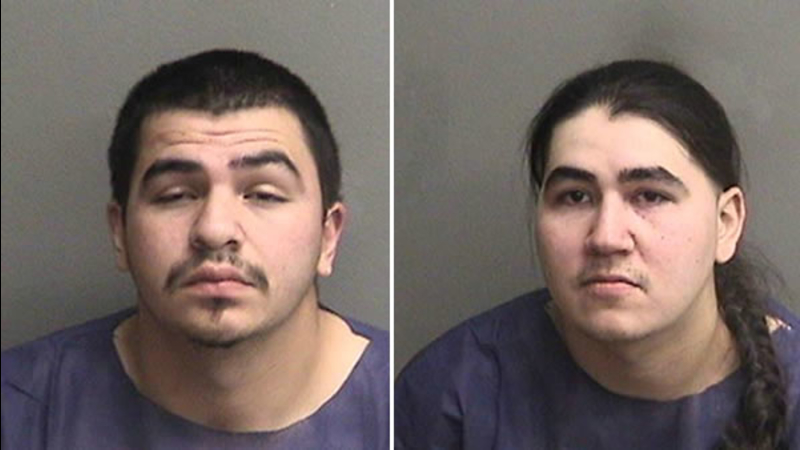 HAYWARD, Calif. (KGO) -- A father went to a Hayward Target on Christmas Eve to get last-minute presents for his children and was stabbed to death in the toy aisle. The two brothers accused of doing it are expected to enter a plea in court on Thursday.

The hearing comes as the suspects' father claims his sons only stabbed the man in self-defense.

The case got heated on Wednesday with the widow yelling out in court and on Thursday the bailiff addressed the emotions.

The bailiff spoke to the family of the accused, telling them she was there if they need her and advising them not to talk to the victim's family or make any eye contact.

When the two defendants walked into the courtroom, the widow of the victim started screaming for them to burn. Frankie Archuleta, 22, and Jesse Archuleta, 25, are accused of killing a father of four inside Target on Christmas Eve.

Authorities say Tyrone Griffin was with his young son and asked the men to turn down their loud music with vulgar language right before he was killed.

His widow says she was overcome with emotion on Wednesday when she saw them but both families say they will continue coming to court.

RELATED: Suspects in Hayward Target stabbing to appear in court

"As soon as this man came out, I saw the long ponytail that my son described. And I just immediately went off. Maybe it was the wrong reaction, I don't know. But this man, he took my husband's life. It was so unnecessary, it was so unnecessary. It could have been totally avoided," Griffin's wife Nicole Simmons said.

"Well yesterday was pretty tough. You know, we're just here supporting our family. I know the other family might be upset and stuff but just like they're here supporting their family, that's what we're here doing as well," the suspects' sister Destiny Archuleta said.

Relatives of the brothers say the two acted in self-defense, that they were hit in the face and head and had to defend themselves.

The widow of the victim says she can't believe it, that it was two against one and she doesn't think her husband would have done that in front of their son. She says surveillance video will show, in her opinion, that i was not self-defense.