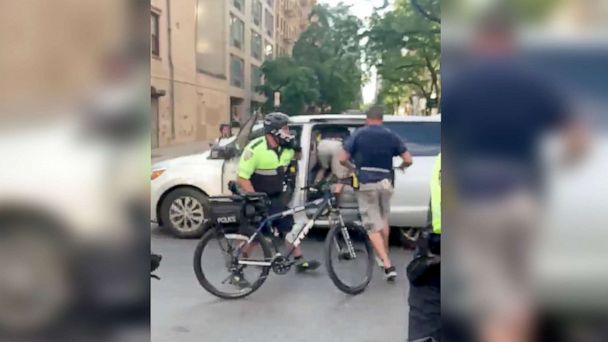 New York political leaders, the American Civil Liberties Union and the Human Rights Campaign are demanding answers after an 18-year-old protestor was arrested by plainclothes officers and thrown into an unmarked van on Tuesday night.

That protestor, Nikki Stone, was arrested at a demonstration near 2nd Avenue and East 25th Street in Manhattan. Other protesters said they were fighting for Black liberation.

Fellow protesters said the arrest looked more like a kidnapping, reminiscent of a tactic used by federal officers in Portland, Oregon.

After video of the arrest hit social media, the response from politicians and nonprofit organizations was swift.

"Our civil liberties are on brink. This is not a drill," Rep. Alexandria Ocasio-Cortez, D-N.Y., wrote on Twitter. "To not protect our rights is to give them away. It is our responsibility to resist authoritarianism."

Carlina Rivera, the councilwoman for the 2nd District of the New York City, where the arrest took place, tweeted that there needs to be an independent review and "an immediate explanation for why an unmarked van full of officers was anywhere near a peaceful protest."

"It's clear that using an unmarked van and plainclothes officers to make an arrest for vandalism (in the middle of a peaceful protest) is a massive overstep. I'm exploring legislation," Rivera later tweeted.


The ACLU called the actions of police "dangerous, abusive, and indefensible," while the Human Rights Campaign (HRC) said the incident was "deeply troubling."

HRC President Alphonso David said in a statement to ABC News that Stone is transgender and this arrest shows how people of color and transgender people face greater risks.

Stone, held for five hours before being released, was charged with five counts of criminal mischief, four counts of making graffiti and three counts of possession of a graffiti instrument.

NYPD Chief of Detectives Rodney Harrison wrote on Twitter that while police welcome peaceful protesters "damage to NYPD technology that helps keep this city safe will never be tolerated." The cameras, he wrote, are "vital resources which help prevent and solve crimes throughout the city."

New York City Mayor Bill de Blasio addressed the arrest in a daily briefing on Wednesday, saying it was "the wrong time and wrong place."

De Blasio said it's been painful to see what is going on in Portland and "anything that even slightly suggests" something similar is happening in New York City is "troubling."