80,000 ballots left to count in San Francisco mayor's race with no clear winner

KGO
By Lyanne Melendez
SAN FRANCISCO (KGO) -- There is no clear winner in the San Francisco mayor's race, with thousands of ballots still to be pressed in the city.

The last time ABC7 News checked, Mark Leno had 50.4 percent and London Breed had 49.6 percent of the vote.

"Nothing is final yet," said John Arntz, the Director of Elections for San Francisco. It's expected to take days, if not weeks, before we know for sure.

Approximately 80,000 ballots remain to be counted, a process which could take several weeks.

While the race appears to be down to two candidates - London Breed and Mark Leno - due to the city's ranked choice voting system, no candidate has been officially eliminated. Each ballot tally is run fresh to properly calculate the ranked choice.

JUST IN: @SFElections department says turn out was high for a primary, close to 50% of registered voters. That typically happens during a presidential election. pic.twitter.com/UlkKNWKyhI

About 4,700 additional votes were counted Wednesday. Approximately 70,000 vote-by-mail ballots need to be processed and may be completed by Monday. To be valid, those ballots must have been postmarked on or before June 5 and received no later than three days after the election. Then, staff will begin to count provisional ballots.

It will take at least to next week to count all ballots, and may take several weeks to complete all counting.

The Director of Elections says he was surprised by the turnout in Tuesday's primary, which he estimates at 50 percent.

"What we experienced yesterday in San Francisco was essentially like a presidential election election day." The California Secretary of State's office has issued a preliminary report on voter turnout and marked San Francisco with 32 percent, the highest of all nine Bay Area counties.

The situation, according to Alex Clemens of Lighthouse Public Affairs, is fluid.

"It can be resolved earlier if trends show that one of the candidates is separating from the other, but I think both candidates are settling in for late nights, chewing fingernails and lots of lawyers," Clemens said.

What appears to be clear is that the alliances formed between Mark Leno and Jane Kim a month ago seems to be favoring Leno because of the rank choice voting system.

"What is encouraging is that it suggests what I had set as my goal, which is to build a very broad case coalition of support from day one," Leno said.

The rank choice voting system has always been controversial. Gavin Newsom, former mayor now running for governor, said it's still confusing to him.

"I've never been an advocate for it. I don't think it's good for this city or this state," he said.

The latest numbers in the #SFMayorsRace after approximately 4,700 votes counted today-@MarkLeno & @LondonBreed almost even. pic.twitter.com/PXpQcUpX6B 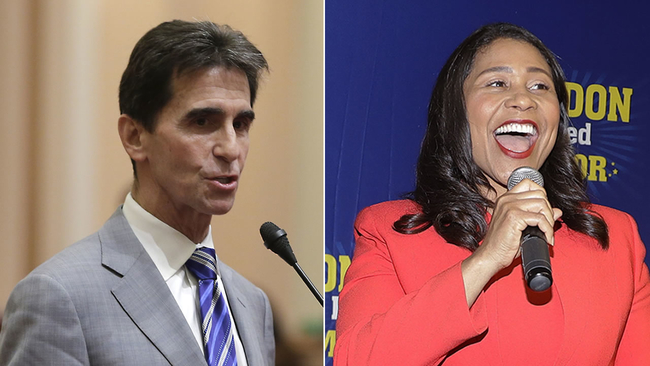