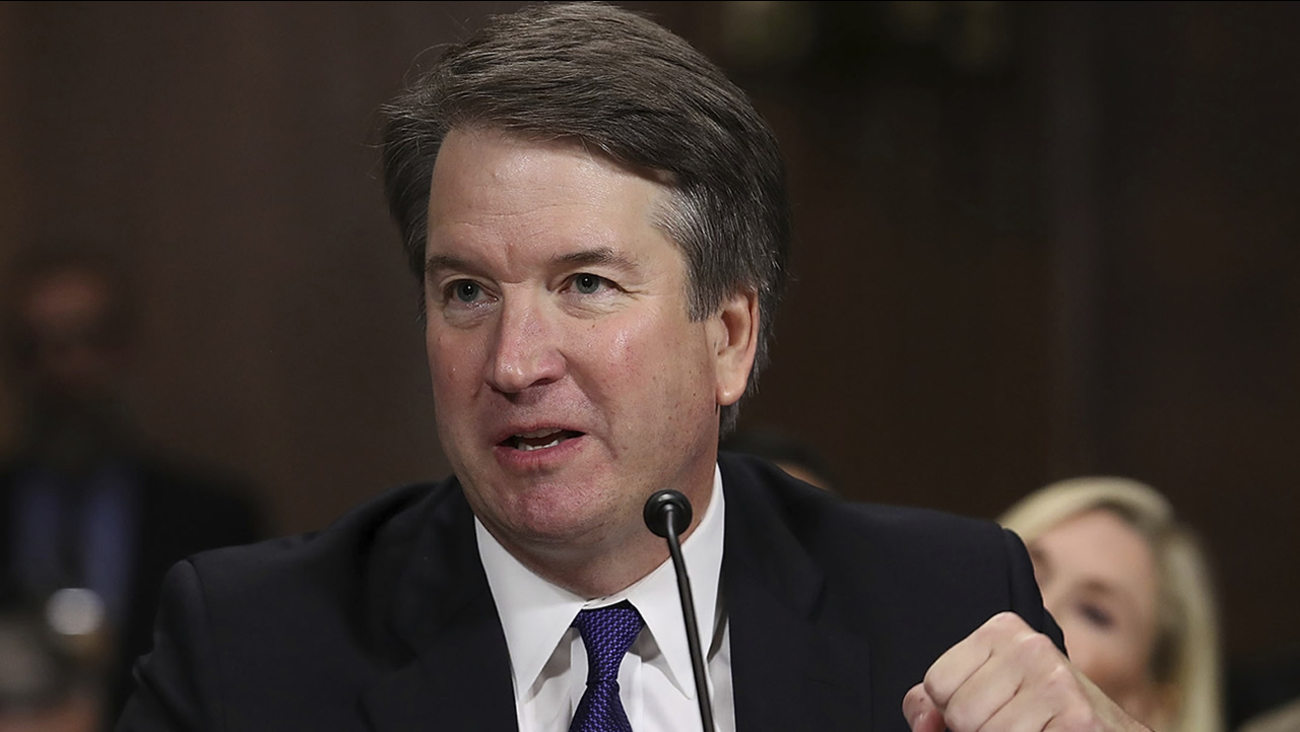 WASHINGTON -- The FBI has contacted Deborah Ramirez, who's accused Brett Kavanaugh of sexual misconduct when he was a Yale student, as part of the bureau's investigation of the Supreme Court nominee, her attorney said Saturday.

Ramirez's lawyer, John Clune, said agents want to interview her and she has agreed to cooperate. Ramirez has said Kavanaugh exposed himself to her at a party in the early 1980s when they were Yale students.

Senate leaders agreed to delay a final vote on Kavanaugh's nomination to allow for a one-week FBI investigation. The Senate Judiciary Committee has said the probe should be limited to "current credible allegations" against Kavanaugh and be finished by next Friday.

Leaving the hearing Friday, Sen. Dick Durbin, a Democrat from Illinois, said it was his understanding there would be an FBI investigation of "the outstanding allegations, the three of them," but Republicans have not said whether that was their understanding as well.

While the precise scope of the investigation remained unclear, Trump told reporters Saturday that "the FBI, as you know, is all over talking to everybody" and said "this could be a blessing in disguise."

"They have free rein. They're going to do whatever they have to do, whatever it is they do. They'll be doing things that we have never even thought of," he said. "And hopefully at the conclusion everything will be fine."

The FBI conducts background checks for federal nominees, but the agency does not make judgments on the credibility or significance of allegations. The investigators will compile information about Kavanaugh's past and provide their findings to the White House and include the information in Kavanaugh's background file, which is available to senators.

Kavanaugh and another of his accusers, Christine Blasey Ford, who says Kavanaugh sexually assaulted her when both were teenagers, testified publicly before the Judiciary Committee on Thursday.

Kavanaugh's high school friend Mark Judge, who Ford says was in the room when a drunken Kavanaugh sexually assaulted her, said that he will cooperate with any law enforcement agency that will "confidentially investigate" sexual misconduct allegations against him and Kavanaugh. Judge has also denied Ford's allegations.

Lawyers for P.J. Smyth and Leland Ingham Keyser, two others who Ford said were in the house when she was attacked, have said their clients are willing to cooperate "fully" with the FBI's investigation.

A third woman, Julie Swetnick, accused Kavanaugh and Judge of excessive drinking and inappropriate treatment of women in the early 1980s, among other accusations. Kavanaugh has called her accusations a "joke" and Judge has said he "categorically" denies the allegations.

Swetnick's attorney, Michael Avenatti, said Saturday afternoon that his client had not been contacted by the FBI but is willing to fully cooperate with investigators.

Last week, Trump tweeted that "if the attack on Dr. Ford was as bad as she says, charges would have been immediately filed" with local police. On Thursday night, he attacked Democrats, saying they have a "search and destroy strategy" and said "this process has been a total sham and effort to delay, obstruct and resist."

After Ford appeared before the Judiciary Committee, Trump said her testimony was "very compelling" and that she appeared to be "certainly a very credible witness."

In the last week, Trump has spoken repeatedly with Senate Majority Leader Mitch McConnell, who has scolded Trump about comments that appeared to cast doubt on Ford's claim, according to two Republicans familiar with the discussions but not authorized to speak publicly about private conversations.

McConnell urged Trump to support Kavanaugh but to avoid attacking his accusers, warning that he was in charge of counting votes and those kinds of disparaging remarks could cause him to lose Republican senators whose votes could be key to confirming Kavanaugh, including Susan Collins of Maine and Lisa Murkowski of Alaska, they said.

McConnell also strongly warned Trump against firing Deputy Attorney General Rod Rosenstein following reports that Rosenstein had discussed possibly secretly recording the president and using the Constitution's 25th Amendment to remove him from office, telling him it could lead to "a bloodbath," according to the Republicans familiar with the conversations.

The Kentucky senator feared it could not only heighten the tension around the delicate Kavanaugh proceedings but could endanger Republican control of the Senate.

RELATED: Rosenstein agrees to meet with House Republicans next week

McConnell has repeatedly stressed to Trump that he should not act on Rosenstein or his boss, Attorney General Jeff Sessions, until after the midterm elections.

McConnell's office declined to discuss the leader's calls with the president, but spokeswoman Antonia Ferrier said the two "speak regularly and have had good conversations."

Longtime McConnell adviser Scott Jennings said it wouldn't surprise him that the Senate leader would be giving the president his best advice on how to be most helpful, even in direct terms.

"I've never known McConnell to be anything other than candid and honest," said Jennings, who did not have direct knowledge of the conversations with the White House.

Taking stock of the week, Jennings noted that the president, by week's end, "has been pretty helpful." Rosenstein wasn't fired. Trump didn't lash out at Sen. Jeff Flake, the Arizona Republican who forced the delay of Kavanaugh's confirmation with the FBI probe. And Trump signed a bill to fund the government and avoid a federal shutdown without "making a stink" about extra money for his border wall with Mexico.