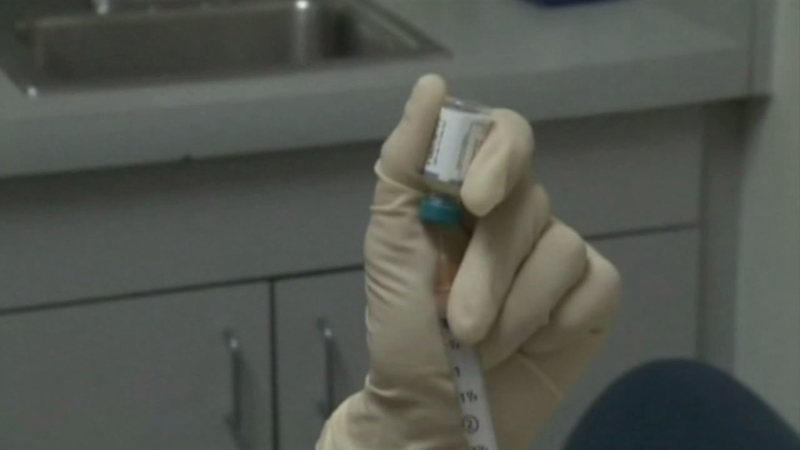 SACRAMENTO, Calif (KGO) -- California's contentious school vaccine bill is now on Governor Jerry Brown's desk. On Monday, the state senate passed the bill that would require vaccinations for every student.

If the bill becomes law, California would join Mississippi and West Virginia as the only states with such strict rules on vaccines.

It has been a while since California has seen a debate as philosophical as this. One brought on in reaction to a measles outbreak at Disneyland.

The question is whether the right of an individual to choose outweighs a supposed greater good.

For San Francisco resident Dr. Amy Bacharach, this was a day of waiting for word from Sacramento. "We had a baby die of whooping cough just in March. There have been more than 70 cases and no mom wants to have their child have a preventable disease," she said.

At the heart of the debate is a personal belief exemption that, until now, allowed parents to not have their kids immunized.

Such was the decision by Mill Valley residents Alex Gatsis and Tim Lundeen, who worry that their son Jace might suffer a bad reaction based on an auto-immune condition.

"Do we move? Do we leave California, maybe?" Gatsis asked.

"I think the whole purpose of the bill is to increase the number of vaccines that are on the mandatory schedule, which is going to generate hundreds of millions of dollars. There is no public benefit to this bill but there is a benefit to Merck, and there is a benefit to the politicians who are getting campaign contributions from the pharmaceutical business," Lundee said.

If Gov. Brown signs the bill, they will need to make a choice - vaccinate their son or home school him.

They describe neither as a viable option.

"It runs contrary to what I think America is based on. I think this nation was founded on the freedom to choose based on reason," Gatsis said.

"They can parent however they want to parent. But with all rights comes responsibilities. And when you choose not to vaccinate, you put not only your own children at risk but your whole community at risk," Bacharach said.

Gov. Brown has 12 days to sign. If he does, the opposition plans to sue.