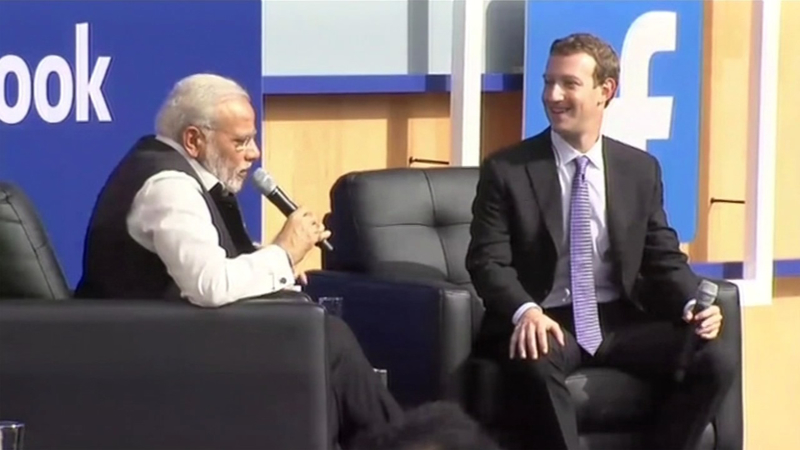 SAN JOSE, Calif. (KGO) -- India's Prime Minister Narendra Modi visited Facebook and Google Sunday to discuss how his nation and Silicon Valley can benefit from working together, but not everyone was happy with the visit.

A large crowd gathered outside the SAP Center in San Jose where Modi spoke in front of a crowd of at least 18,000 people.

Many people are protesting his visit to California and some are supporting it.

Modi is showing Silicon Valley that he is tech savvy and ready to do business. "He is emerging as a famous world leader now and he so much deserves it, he's done so much in India," Rigu Sharma said.

Modi's tech tour began with a town hall meeting at Facebook with CEO Mark Zuckerberg. The prime minister told the crowd he loves social media. He has at least 30 million Likes on his Facebook page and 15 million Twitter followers. "What I'd say to world leaders all over the world is that you are not going to gain by running away from social media. You can't run away from social media, you must join it," he said.

India is one of the fastest-growing economies in the world, so this is a huge opportunity to deepen digital ties with United States tech companies.

Venk Shukla supports entrepreneurs in Silicon Valley. "The faster the Indian economy grows the better the business prospects for all the technology companies here," he said.

Modi supporters like his digital India plan to expand high-speed Internet to 80 percent of the country.

But Modi was also met by protesters who call the prime minister's human rights record dismal. "His ideology means success for some, bur oppression for many. That manifests as cast oppression, gender violence," Alliance for Accountability and Justice spokesperson Sabiha Badrai said.

Others see Modi as the face of a new India trying to end poverty while embracing technology.