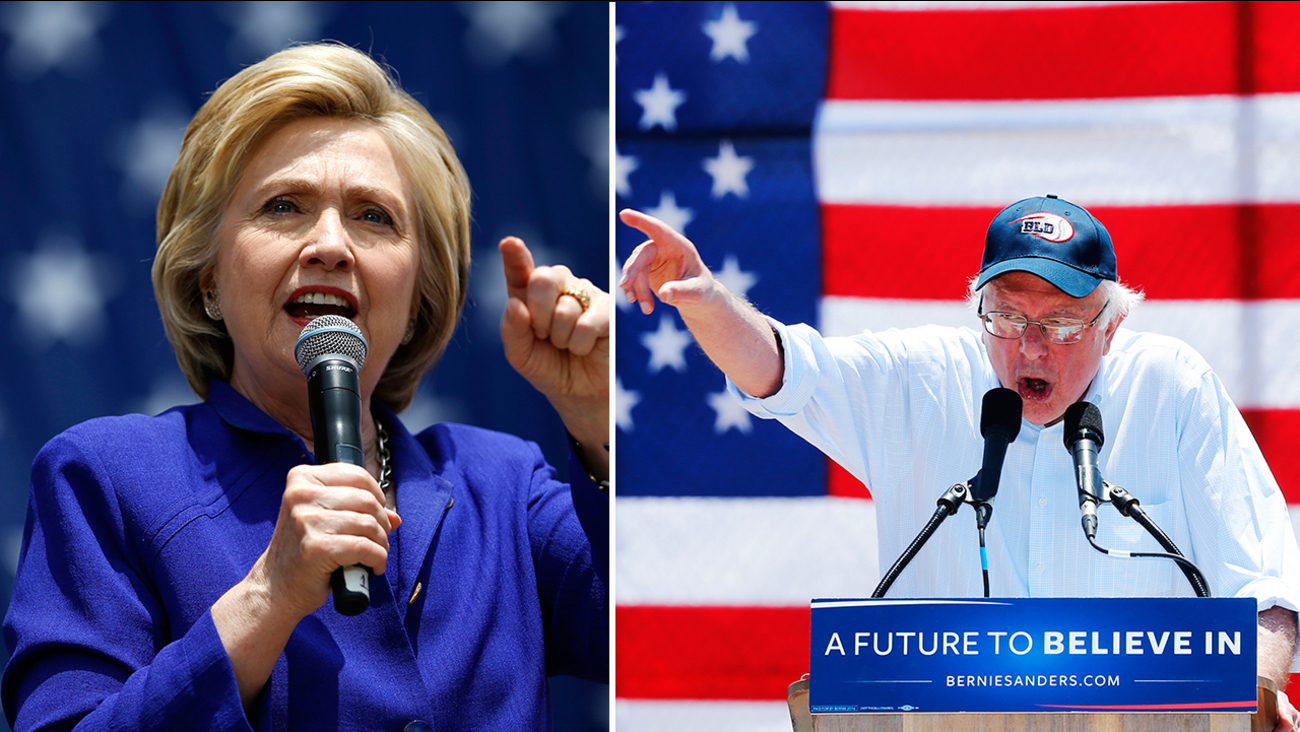 LOS ANGELES (KGO) -- Claiming her place in history, Hillary Clinton declared victory Tuesday night in her bruising battle for the Democratic presidential nomination, becoming the first woman to lead a major American political party and casting herself as the beneficiary of generations who fought for equality.

"This campaign is about making sure there are no ceilings, no limits on any of us," Clinton said during an emotional rally in Brooklyn, eight years to the day after she ended her first failed White House run. As she took the stage to raucous cheers, she paused to relish the moment, flinging her arms wide and beaming broadly.

Clinton had already secured the delegates needed for the nomination, according to an Associated Press tally. She added to her totals with victories in New Jersey, New Mexico and South Dakota, three of the six states voting Tuesday.

Clinton faces a two-front challenge in the coming days. She must appeal to the enthusiastic supporters of her rival Bernie Sanders - who insists he still has a narrow path to the nomination - and sharpen her contrasts with presumptive Republican nominee Donald Trump.

She sought to make progress on both, using her own loss in 2008 to connect with Sanders' backers.

"It never feels good to put our heart into a cause or a candidate you believe in and come up short," she said. "I know that feeling well. But as we look ahead to the battle that awaits, let's remember all that unites us."

She was biting and sarcastic as she took on Trump, accusing him of wanting to win "by stoking fear and rubbing salt in wounds - and reminding us daily just how great he is."

Even as the Democratic race was ending, new turmoil broke out among the Republicans. GOP leaders recoiled at Trump's comments about a Hispanic judge, with one senator even pulling his endorsement.

Trump capped his difficult day with victories in California, New Jersey, New Mexico, South Dakota and Montana. But he was muted his victory rally, saying he understands "the responsibility" of leading the Republican Party. He also made a direct appeal to dejected Sanders supporters and other Democrats.

"This election isn't about Republican or Democrat, it's about who runs this country: the special interests or the people," he said. Trump promised a major speech next week on Clinton and her husband, former President Bill Clinton.

Clinton's win in New Jersey came a day after she secured the 2,383 delegates she needed to become first female presumptive nominee of a major political party, according to an Associated Press tally. Her total includes pledged delegates won in primaries and caucuses, as well as superdelegates - the party officials and officeholders who can back a candidate of their choosing.

President Barack Obama called both Clinton and Sanders late Tuesday. The White House said Obama congratulated Clinton for "securing the delegates necessary to clinch the Democratic nomination for president" and praised her "historic campaign," though he did not formally endorse her.

Clinton and Sanders were both pressing for victory in California, each eager to effectively end their primary battle on a high note.

Sanders picked up a win in North Dakota, where a handful of delegates were up for grabs.

Sanders hoped a victory would help in his so-far-unsuccessful bid to get Clinton superdelegates to switch their support. Asked on NBC whether he was continuing that effort, he said, "We are. We're on the phone right now."

Clinton and Sanders are also expected to connect in the coming days, Clinton's spokesman said late Tuesday. The candidates' campaign managers spoke earlier in the day, signaling that conversations were underway about the road ahead.

Republicans had appeared unified after Trump vanquished his last opponents about a month ago. But the real estate mogul has continued to make controversial statements, frustrating party leaders.

The latest cause for GOP concern was his insistence that a judge handling a legal case involving the businessman was being unfair in his rulings. Trump has said U.S. District Judge Gonzalo Curiel can't be impartial because the jurist's parents were born in Mexico and Trump wants to build a wall along the border.

Illinois Sen. Mark Kirk, who is locked in a close re-election fight, became the first lawmaker to pull his endorsement of Trump. House Speaker Paul Ryan said the businessman's assertion was the "textbook definition of a racist comment" but he would continue to support Trump.

Trump released a statement saying he does "not feel one's heritage makes them incapable of being impartial." But he still questioned whether he was receiving fair treatment in the case involving the now-defunct Trump University.

Sanders' achievements have been remarkable for a candidate who was unknown to most Americans before the campaign. He has drawn massive crowds to rallies around the country and built a fundraising juggernaut based largely on small donations online. The Vermont senator has been particularly popular with young voters, an important piece of the Democratic coalition.

Still, Clinton's victory has been broadly decisive. She leads Sanders by more than 3 million cast votes.

After her win in New Jersey, Clinton had 2,469 delegates to Sanders' 1,637. That count includes both pledged delegates and superdelegates.

Have you voted? Share your pictures with us on social media using #abc7now!