KGO
By Lyanne Melendez
SAN FRANCISCO (KGO) -- As the presidential campaign comes to an end Hillary Clinton acknowledged at her stop in San Francisco Thursday that people are getting tired and they wish it could be over. Despite the collective exhaustion Clinton managed to energize her supporters.

It was an unscheduled event. Clinton made a stop at her headquarters in San Francisco to thank volunteers for their work during this campaign.

"These people were working making calls, she walked in and it exploded," said Clinton campaign volunteer Debra Walker. "There's so much enthusiasm for this woman."

"I really want all of our people, but especially our young people and our children to know that America is great because America is good," Clinton said.

Roberto Hernandez brought his 8-year-old son Tito, hoping to meet the nominee. He did and managed to take a picture with Clinton.

"I really wanted to come and this is my first time to see her in real life," said Tito.

Kathy Bruin of San Francisco decided to treat herself on her birthday by attending the fundraiser.

"And I had to text my mother first and say you know, 'should I do this?' you know," she said. '"Should I spend $250 on this event' and she said, 'this woman's going to be president' and I'm like okay, and I just I bought the ticket."
Inside, supporters laughed when Clinton talked about the attacks by her opponent Donald Trump saying she understands how it may force people to turn away and spend time watching cat gifs.

"Believe me, I get it," she said. "In the last few weeks I've watched a lot of cats do a lot of weird and interesting things."

With 26 days before the election, Clinton will be in Beverly Hills for the next fundraiser. 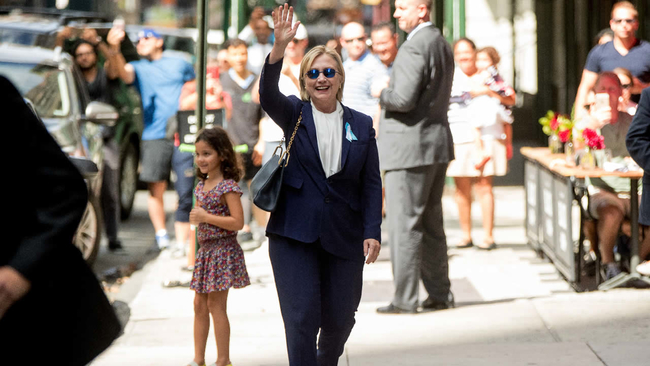