Bay City News
SAN FRANCISCO -- Hundreds protested at San Francisco International Airport Saturday to condemn reports that some immigrants are being held at the airport under President Donald Trump's executive order banning entry into the U.S. from certain Muslim-majority countries.


The protesters blocked the street in front of the international arrival area of the airport, which was been closed to traffic, airport officials said. Passengers were being picked up on the departure level or in the garages.

RELATED: Hundreds protest after 11 detained at JFK amid immigration crackdown

Lara Kiswani, an organizer with the Arab Resource and Organizing Center said, "We have lawyers currently at SFO. What we're not clear about is who or what type of families are being held, whether they're from Syria or Iran or other countries, we don't know for certain."

Attorney Susie Hwang said nearly a dozen attorneys who arrived at the airport's International Terminal in response to a call from the International Refugee Assistance Project asked attorneys to help immigrants being detained at airports across the country.

"I'm concerned about the abuse of law and the disregard for the constitution," Hwang said of Trump's order.

Hwang said several families were at the airport waiting for several hours to hear word about whether their loved ones will be allowed to leave the airport or returned back to their countries.

According to Hwang, one woman had been waiting for seven hours for her 30-year-old son, who arrived at the airport from Iran early Saturday morning. The woman received asylum in the U.S. six years ago and is hoping her son will as well.

"Based on his religion, he is being persecuted and is in grave danger if he does go back," Hwang said.

The protesters chanted "racists out, refugees in" and sang "This Land is Your Land."

Protesters have moved INTO International arrivals section of SFO chanting "Let the lawyers in, let the families out" pic.twitter.com/5DBL1KFsnX

The American Civil Liberties Union announced Saturday that it was taking legal action on behalf of two individuals detained in New York under the order. The national Council for American Islamic Relations said it would be filing suit on behalf of 20 more individuals on Monday.

"We are prepared to fight back against these racist executive orders and will defend and protect all communities and normalize resistance to Trump everywhere," Kiswani said in a statement.

A protest was scheduled for 3 p.m. Saturday at the International Terminal to denounce the order.

SFO spokesman Doug Yakel said he was aware of the protest, but referred any questions about enforcement of the order to U.S. Customs and Border Protection.

"Our goal is to allow for this free speech activity while also ensuring travelers are able to move through the Airport unimpeded," Yakel
said.

Frank Falcon, a local Customs and Border Protection spokesman, referred questions about local enforcement of the order to the agency's national office, declining to say whether the agency was even enforcing the order in Bay Area airports.

Calls and emails to the national Customs and Border Protection public affairs office were not returned.

It's become crowded at International Arrivals as the crowd chants for passengers coming through Passport Control. pic.twitter.com/piBpiH25L7 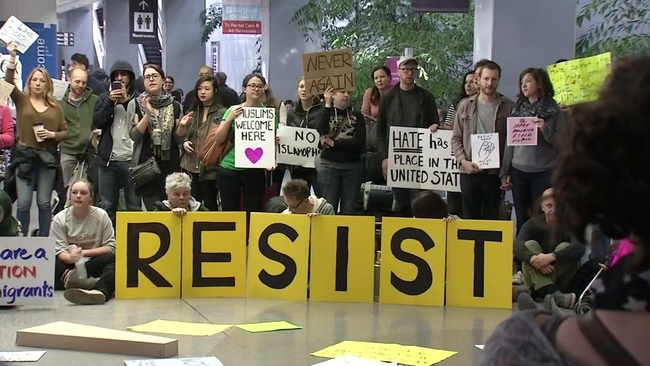 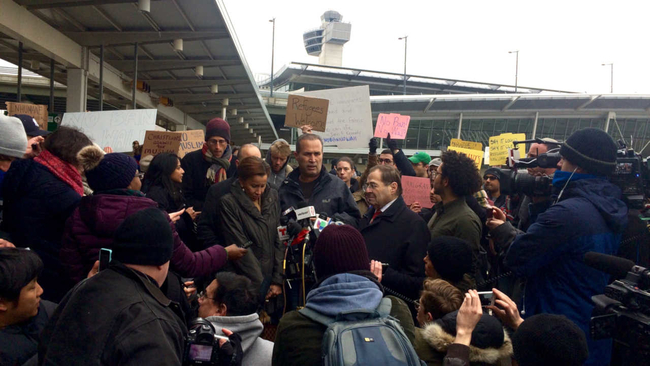