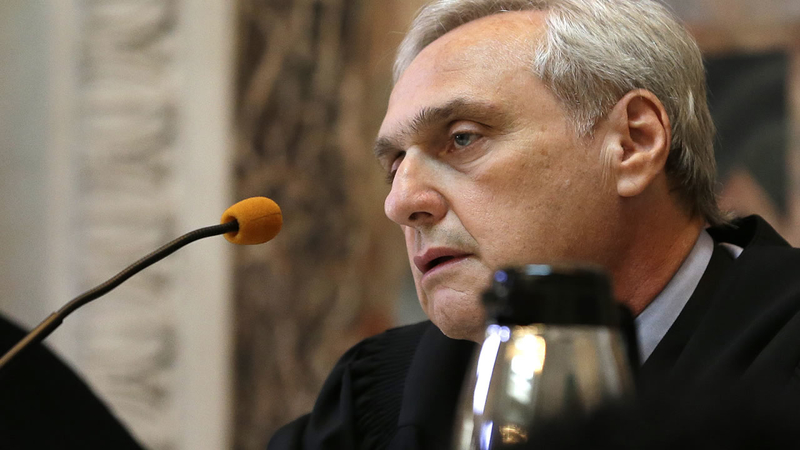 SAN FRANCISCO (KGO) -- It's the abrupt end to a high profile career. The 9th Circuit Court of Appeals which serves California and other western states is without a judge Monday night after Alex Kozinski abruptly resigned. He stepped down after a number of women accused him of sexual harassment.

Now after 32 years serving on the 9th Circuit, he retired today after multiple allegations of sexual misconduct -- most from former clerks like Emily Murphy. Now a professor at UC Hastings College of the Law, she accused Judge Kozinski of suggesting she exercise naked in the courthouse gym.

Michele Dauber is a Stanford Law professor. "When that kind of misconduct is enabled, perpetrated or condoned within the legal profession, I think it's especially problematic because it sends a message to women that they do not have access to justice," she said. "Especially problematic."

The allegations against the 67-year-old Kozinski span decades, some even pointing to the 1968 appearance on the show the Dating Game as an example of his behavior towards women.

While sexual harassment allegations now seem to be coming every day. Larry Organ represented what was then a watershed case in 1994 that captured international attention and ended with millions in punitive damages for a San Francisco secretary named Reena Weeks who sued her boss and won.

Organ applauds the women for "having the guts to make their claims."

"I hope the message to all women is go ahead and stand up because it's reaching critical mass now," Organ added.

Kozinski was appointed to the appeals court bench by Ronald Reagan. President Trump will now name his replacement.

Below is the statement issued Monday by Kozinski regarding his retirement.

It has been an unparalleled honor to serve as a federal judge for more than thirty-five years. I firmly believe that a strong judiciary, free from political pressures, is vital to the preservation of this great nation. I found in this country, and in my work, opportunities and satisfaction that I never thought imaginable when I arrived here, at the age of 12, a refugee from Communism. I am grateful to my colleagues with whom I have had the privilege of serving, and to the countless hard-working lawyers who have appeared before me. I have learned so much from them all and will be forever grateful for their professionalism, intellectual rigor, and in many instances their steadfast friendship.
It has also been my privilege to help train the best and the brightest of several generations of new attorneys. I was made better by working with them. My clerks went on to stellar careers in law, business and academics. Their success has made me proud and I am gratified by the outpouring of support I have received privately from so many of them.

Still, I've always had a broad sense of humor and a candid way of speaking to both male and female law clerks alike. In doing so, I may not have been mindful enough of the special challenges and pressures that women face in the workplace. It grieves me to learn that I caused any of my clerks to feel uncomfortable; this was never my intent.

For this I sincerely apologize.

A couple of years ago, as I reached the age when several of my colleagues had decided to take senior status or retire, I began considering whether the time had come for me to move on as well. Family and friends have urged me to stay on, at least long enough to defend myself. But I cannot be an effective judge and simultaneously fight this battle. Nor would such a battle be good for my beloved federal judiciary. And so I am making the decision to retire, effective immediately.