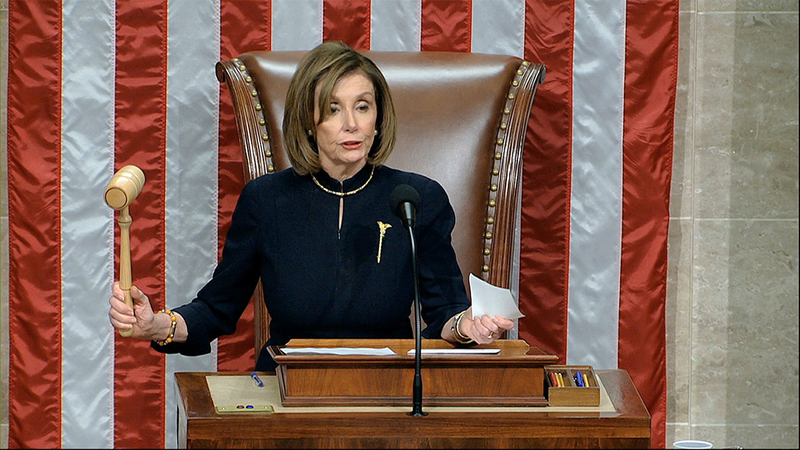 WASHINGTON -- The House's center of power took a seat toward the back of the chamber Wednesday. Her golden mace brooch, symbol of the House and the speaker's authority, glinted.

And when it was time to vote, House Speaker Nancy Pelosi ascended the speaker's chair and presided over President Donald Trump's impeachment, shooting jubilant Democrats a forbidding look to stop them from clapping.

Pelosi, second in line to the presidency, ended the day with uncharacteristic uncertainty, repeatedly refusing to say when - or whether - the House will send the articles to the Senate for trial. "We'll see" whether the Senate announces terms she considers fair, she told reporters.

Like it or not, Pelosi's role leading Trump's impeachment will dramatically shape her legacy after more than 30 years in Congress. The House voted mostly along party lines Wednesday night, making Trump only the third president formally charged in American history.

That is Pelosi's to keep.

"Today, as speaker of the House, I solemnly and sadly open the debate on the impeachment of the president of the United States," Pelosi said.

She spent much of the day within a few steps of the cloakroom door, away from better-lit seats where the managers and members were debating impeachment.

It was a show of confidence in a town where body language and proximity often convey power. She sat for long stretches flipping through other work, checking her phone and keeping an eye on the debate.

Being remembered for impeachment is not something she relishes after a career spanning six presidents, several wars, passage of the Affordable Care Act and her own debut as speaker. But she said Trump had left the Democrats with "no choice" other than to act.

Pelosi arrived in the chamber with Democrats largely unified, thanks to a careful balancing act that played out over several months. The House was impeaching Trump, as liberals had long demanded. The impeachment articles centered on Trump's pressure on Ukraine, as moderates wanted. And a slate of other legislation was wrapped, giving all the Democrats achievements to show off at home.

Pelosi's hold on the caucus made it possible for her to lead just by being there, rather than openly twisting arms as she had during passage of the health care law. Democrats lost the House the next year, and with it, Pelosi lost the speaker's post.

Back in possession of the gavel this year, Pelosi resisted impeachment until a whistleblower's report revealed Trump's pressure on Ukraine to investigate his political rivals. That, she said, the House could not ignore. But neither would they celebrate it.

"He gave us no choice," Pelosi, clad in black, said from the well of the House.

Trump, a lifelong businessman now face-to-face with an equivalent branch of government, insists he is the victim of Democrats who have wanted to impeach him from the start.

He weighed in on Pelosi's legacy, too, predicting on Twitter she'll go down as history's "worst speaker." In a letter released on the eve of voting, he said Pelosi "is after the entire Republican Party."

Pelosi's ultimate power moment Wednesday was a stark departure from where she was a year ago, after the 2018 elections ushered in a new generation of lawmakers. Some newcomers, such as Virginia Rep. Abigail Spanberger, did not vote for Pelosi to return to the speakership.

But many more, such as Rep. Alexandria Ocasio-Cortez, ultimately helped put Pelosi back on top.

What unfolded since then has been a study in Pelosi's ability to play the power game against Trump. Earlier this year, she forced him to retreat and reopen the government without the border wall he demanded. She then invited him to deliver his State of the Union speech from the House chamber - but during the event threw her particular brand of shade his way with a smirk and clap from behind him.

She did it again during a White House meeting in October. In an image released by the White House, Pelosi can be seen standing and pointing a finger across a table at him, while the president says something back. The men on Trump's side are looking away. Pelosi walked out of the meeting immediately afterward.

All along, even as she derided Trump's "manhood" in a private meeting, Pelosi resisted impeaching Trump. It was too divisive, and the country was already too divided, she said.

But in September, a group of new lawmakers from Trump-won districts, including Spanberger, gave Pelosi the cover to proceed with an impeachment inquiry. They wrote an op-ed published in The Washington Post supporting impeachment over Trump's conduct toward Ukraine.

"A solemn moment" has been Pelosi's message to Democrats throughout the House Intelligence and Judiciary Committee hearings that followed. No more boasts that "we're going to impeach the motherf--ker," as freshman Rep. Rashida Tlaib of Michigan declared on her first day in office. Democrats, Pelosi made clear in public and private, were not to celebrate when the House approves the articles of impeachment.

Pelosi could have spent the entire day Wednesday in the speaker's chair, gavel in hand, though that would have been unusual, an aide said. She could have camped out in the television frame, closer to Judiciary Committee Chairman Jerrold Nadler, who was managing the debate. She might have sat in the front row, as several new members did.

But there was no need. By the time she entered the chamber Wednesday morning, nearly all the Democrats stood together to vote for impeachment.

In the well of the House, Pelosi said that nothing short of the future of democracy was at stake.

"If we do not act now, we would be derelict in our duty," she said.
Report a correction or typo
Related topics:
politicsimpeachmentrepublicansdemocratspoliticsnancy pelosipresident donald trump
Copyright © 2021 by The Associated Press. All Rights Reserved.
IMPEACHMENT 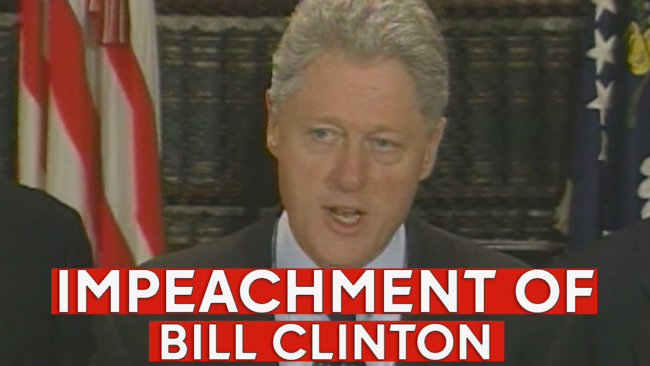